A Dance with the Devil

A House of Cards

A Dance With The Devil is the eleventh mission in Hitman: Blood Money. Agent 47 is hired to kill a corrupt CIA agent involved in weapons trafficking, Anthony Martinez, and his lover, Vaana Ketlyn.

Agent 47 assassinated his targets, and was able to kill two powerful Franchise assassins as well. The information obtained from Eve's laptop confirmed the Franchise to be behind the attacks on the International Contract Agency.

It's over, 47. I'm closing shop on this end. This will be your last assignment. There are two targets. Vaana Ketlyn, a former Romanian circus performer who's now a big player in the global gray market, and a CIA operative who's been playing both sides of the fence. Ketlyn's hosting a masquerade party at the Shark Club, in Vegas, and the CIA op'll be there to close a deal. Even if this job isn't a set-up, your presence will almost definitely be expected. You're our only surviving agent, 47. Find out whoever it is that's been coming after us. Eliminate both targets - and anyone that targets you - and exit in the vehicle I'll have ready for you in the parking garage. You've been a very effective agent. It's been pleasant to work with you. I hope the future is kind to you.

SLP .40
Carried by security guards in the parking lot, all Heaven guards, and the Hell guards posted by the elevator.

MP5
Carried by Maynard John and the Hell guards guarding the door to Ketlyn's private chamber.

Dragunov SVD
Stored in Eve's briefcase in the top floor office, next to the laptop.
Add a photo to this gallery

Stilleto
Carried by Eve
Add a photo to this gallery

The types of masks used by the guests and employees. 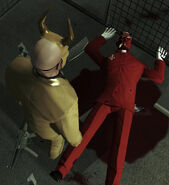 47 proves he is the superior assassin in the duel with Maynard John.
Add a photo to this gallery

Retrieved from "https://hitman.fandom.com/wiki/A_Dance_with_the_Devil?oldid=81634"
Community content is available under CC-BY-SA unless otherwise noted.