< A Personal Contract
View source
watch 01:54
Arcane: League of Legends - The Loop
Do you like this video?
Play Sound

Having finally tracked down Agent 47's former handler, Diana Burnwood, the International Contract Agency offers 47 the contract to eliminate her. Burnwood is the sole target of this mission, and Victoria must be recovered.

47 gains access to the entrance of Burnwood's mansion by approaching in an ice cream truck and subsequently subduing the guard that comes to investigate. The mansion is clearly under protection by a rather intimidating security team, and seems to be expecting some type of threat. Had the ICA desired a full, frontal assault, they would have sent the Saints or another assault team. As such, a stealth approach to the target is encouraged.

Heading down the pathway you will encounter a guard. He will move forward to a toolbox and kneel down. You can use a nearby brick, wrench, or axe to toss against the barrels on the left. As he moves to investigate the noise, move along the rock face on the right side until you reach the fallen tree.

Subduing the guard talking on his cell phone in the tennis court is optional; he only poses a true threat if playing on hard difficulty or above. From here, you have two options. You can follow the path to the left of the tennis court, or the path to the right of the tennis court. The path to the left pits you against far less opposition than the right, but both are equally as simple. Regardless of which path is taken, the structure in the middle of the garden can be shot in the base, causing it to topple over, crushing any poor souls who might happen to be beneath it; doing so will reward the Modern Art challenge.

If taking the path on the left, make your way to the rock face on the right side of the path just after exiting the tennis court. Follow the cover down to the path leading to the center, and use the on-screen prompts to change cover to the other side. Follow the cover some more until you reach the edge. Use the book on the wall to toss it to the right to distract the guard. After he heads over to check it out, move to the left, passing the "plus shaped" walls and taking cover against the "round wall" just past it.

Once you have taken cover on the round wall, wait a few seconds for the two guards two begin conversing. They will walk towards each other, pause briefly - chatting - and then continue to the right. As they are turned away, break to the left and head over the bridge to the door to the Greenhouse.

The path to the right, the one the tutorial typically takes you through, is a little more hands on. It pits you against many more foes than does the left, but it is still quite simple. When taking the right path, it is possible for the guard talking on his cell phone on the tennis court to cause problems, so subdue him and stash him in one of the nearby tennis court boxes. Depending on the time elapsed, a guard will be standing just outside the tennis court gates to the right, or he will have proceeded further down and will be standing at the base of the stairs. Due to his positioning, he will need to be subdued and dragged back up towards the tennis court to be stowed away. Taking the time to stash the bodies in containers will allow adequate spacing and timing between you and the other guards.

After following the path at the base of the stairs to the left, a guard will be standing at the wall with his back turned. Wait until he proceeds under the cabana, and then subdue him. This conveniently places him just in front of a storage container, so stash him and proceed.

Provided the guard has already passed, it is safe to go down the short staircase and make your way to the small wall fragment on either the left or right side. Like the left path, you'll need to wait until the guards proceed to converse and begin to walk. After they head down one of the paths away from the exit, make your move. Head down the path, and over the bridge to the Greenhouse.

Greenhouse is rather linear since there is only one possible path to take to the destination. After entering the section, take cover behind the nearest counter with the watermelon on top. Do not take cover on the second one, since a guard walks directly between the two and will spot you.

The tutorial will urge you to grab the filet knife off the counter and use it to lethally throw into your targets. This is optional. You either kill them with a weapon, or simply push them over the edge using the on-screen prompts when close behind them. If you kill one of them without shoving them over the edge, you may pick up their disguise, Mansion Exterior Guard. Alternatively, you may eliminate the two guards and pick up the Gardener disguise which lies on a table beside the path leading to the glass greenhouse.

This is the first time Instinct Mode is absolutely necessary to reach a destination; without it, no matter which disguise you're wearing at this point, you will be spotted. A guard and a gardener flank either side of the entrance to the greenhouse.

After determining which path to take, the ultimate target is a valve on the back wall. Use the on-screen prompts to trigger the event - dousing the guards covering the exit with a sprinkler - and subsequently forcing them off of the doorway. They will move outside to look out across the water. Take advantage of the opportunity and sneak past them, making your way to the edge of the building at the top of the stairs. Climb onto the ledge and inch forward. Drop down when prompted to enter Cliffside.

Cliffside is short and linear. It is a matter of moving forward and pressing on-screen prompts to move 47 across the windows and scale the ledge of the mansion. When approaching the window towards the end, a man will be inside talking on his cell phone. Once flush against the window, use the on-screen prompt to pull him out of the window; doing so will reward the Geronimo challenge. Alternatively, if you want to want to play more humanely, you can wait for him to turn around and walk away from the window and subdue him.

The other guard, standing with his back to the window, can be subdued, dragged, and tossed out the window, after taking his disguise. Gardeners and exterior guards are not allowed inside the mansion.

Once in the security room, make your way to the console and disable it. Turn around and head through the door.

The objective of Mansion Ground Floor is to acquire the keycard to access the second floor. After making it onto the ground floor of the mansion, head left and head up the stairs to the second floor. Be cautious: a guard will be heading down the stairs to listen to the briefing by the head of security. Head directly across from the top of the stairs grab the statue bust, then into the bathroom, and pick up the sleeping pills from the bathroom counter.

Head back downstairs, crouch, and enter the kitchen, and take cover on the counter on the left. Use the on-screen prompt to transition to the right side. In order to skip the dialogue between the chef and one of the guards, toss the bust between the pots and pans against the wall next to the door on the far side. After the guard heads into the next room, head through the opening on the left, into the main living room, and drug the head of security's coffee. After he drinks it, he will proceed to where the guard you previously distracted went, stumble, and pass out on a chair. The Damn Good Coffee challenge will be rewarded.

Take the keycard and stash the body of the head of security in the nearby closet. For laughs, and another challenge, dose the chef's pot when he isn't looking and let him pass out; the Extra Spice challenge will be rewarded. You can stash his body for additional points, as well as nab his outfit for the Chameleon challenge.

Make your way up the staircase you ascended in the beginning of the level, follow the walkway around to the right, and proceed through the door.

The second floor is similar to Cliffside because of its linear nature. After making it to the second floor, all that needs to be done is to follow the path to Diana's bathroom. It is here that 47 confronts Diana, and a short cutscene plays. After accepting Diana's final request, control is regained until the end of the mission.

Proceed through the series of doors until you come to one with four guards. Enter Point Shooting and eliminate the four guards. Pick the lock on the door to the left to end the mission.

The first piece of evidence, located in Cliffside, can be found in the security room after scaling the side of the mansion. It lies on a server rack just to the right of the door leading to Mansion Ground Floor. Since there are no guards inside the security room, it can be easily acquired.

The second piece of evidence, located in Mansion Ground Floor, can be found on a small round table in the small sitting area in the living room. Due to its placement, it is very difficult to grab while wearing any disguise except for the Chef disguise. It may be obtained with the interior guard outfit, but you will need to be cautious, as there are many guards nearby to bypass.

This disguise can be found in the Greenhouse portion of the mission, worn by several guards patrolling the exterior of the mansion.

This disguise can be found in the Greenhouse portion of the mission, on a table beside the path leading to the greenhouse, and is worn by several gardeners working inside the greenhouse.

This disguise can be found in the Mansion Ground Floor portion of the mission, worn by the executive chef employed by Diana.

This disguise can be found in the Mansion Ground Floor portion of the mission, worn by several guards patrolling the interior of the mansion. 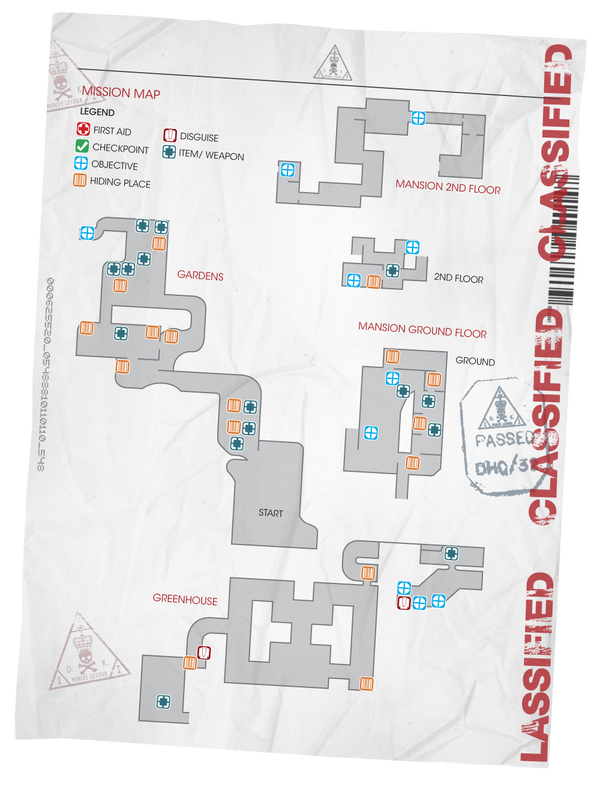