Khan Abdul Bismillah Malik is the primary target in the mission Motorcade Interception. He was once a rebel leader, but lost his spirit to oppress his people in the Kunduz valley. He was assassinated by Agent 47 in Nuristan.

Born in a secluded citadel, deep within the Kunduz valley, Abdul Bismillah Milak was seen by his people as a hero, and the local folklore already coined him as a paladin, bringing prosperity to this barren land. However - complacency, indolence and greed set in. Years of international terrorism, illegal drug trafficking and arms deals has earned him a reputation and a listing on the FBI's Most Wanted List.

He got softer on the religious principles and harder on the locals (to keep up his increasing demands of living standards). No more makeshift tents and dugout latrines! So - although he's lost his rebel credentials (and gained a great deal of weight!), he still holds the locals in a firm grip of terror, as refugees in a lawless state. The warlord is definitely not invulnerable, but almost untouchable.

In 2002, Abdul Bismillah Malik stole some cargo from a Russian Mafia boss, and attempted to formulate a deal with the United Nations to sell the stolen powerful atomic weapon for a large sum of money to them.

As he is a powerful political leader, he is being protected by inhospitable mountains and vast deserts, he also has his staunch and taciturn bodyguards and travels in an armoured car in a cortege, on the rare occasions that he ventures out. Due to the circumstances of the deal, he is also surrounded by an entourage of UN soldiers on the day the deal takes place. This however, didn't protect him from his assassination by Agent 47. 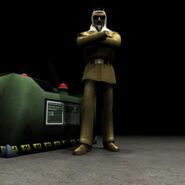 Malik standing next to the nuclear device.
Add a photo to this gallery
Retrieved from "https://hitman.fandom.com/wiki/Abdul_Bismillah_Malik?oldid=76091"
Community content is available under CC-BY-SA unless otherwise noted.