Agnija "Aggie" Radoncic is a new character introduced in Hitman: Absolution and a member of an elite group of killers, code-named The Saints.[1] She is the fourth Saint to die at the hands of Agent 47.

Agnija is a member of the elite ICA team, code-named "The Saints". She is searching for and training potential new members for this group under the specific orders of Benjamin Travis.

She is one of the twin members of the Saints and fights alongside her biological twin sister, Dijana "Di" Radoncic. They were born in Serbia. Their parents were Serbian and Croatian. Although they are very similar, they are very different in terms of attitude and style. She comes from Montenegro, a country ravished by years of inter-ethnic wars and as a result, grew up knowing the hardships of life and cruelty.[2] After the parents died, she and her sister joined a guerilla group and later an underground vendetta movement.

Hunt for Agent 47. Aggie shown standing second from the right. 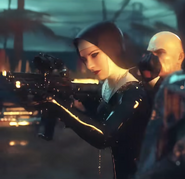 In the "Attack of the Saints" trailer, she was the very first victim of Agent 47, being strangled by him from the back.

Agnija Radoncic in Attack of the Saints.

Notification of death on duty.