Alvaro D'Alvade (called Philippe Berceuse in Hitman: Contracts) is a famed Italian tenor opera singer. He is involved in a child prostitution ring with his friend US Ambassador Richard Delahunt, smuggling male and female children from around Europe to France. In Hitman: Blood Money, he is killed by Agent 47 on March 17, 2004, during rehearsals for a production of Tosca in which D'Alvade is cast as the tenor, Mario Cavaradossi.

D'Alvade is called Philippe Berceuse in Contracts and is stated to be Portuguese, with his name and nationality retconned in Blood Money. Berceuse is listed as a target in Hunter and Hunted, but the objective to eliminate him is already marked as completed. His profile in the mission briefing describes him as being temperamental and as having "an important yet unclear role in Delahunt's operations". He was 45 years old when he died.

Philippe Berceuse appears properly in the mission Curtains Down, now renamed Alvaro D'Alvade. He is said to be considered one of the world's greatest opera singers, but is also controversial and blacklisted by some operas. He is known to have a volatile temper, and is never satisfied with the performances of his fellow actors. D'Alvade is also known to be a pedophile targeting children of both sexes. He was once charged with the statutory rape of a 13-year-old girl. The charges were dropped after the girl refused to testify and subsequently disappeared. Although D'Alvade was suspected of her murder, her body was later found and her death ruled a suicide.

US ambassador Richard Delahunt is his biggest fan and implied lover. D'Alvade is said to be one of the best customers of Delahunt's child prostitution ring. 47 is paid to kill D'Alvade and Delahunt at the Paris Opera House, while D'Alvade was rehearsing for Tosca.

Inspector Albert Fournier is said to be a recent mutual friend of Delahunt and D'Alvade, although the exact nature of their relationship is not made clear. Fournier was supposed to be a third target for the mission and the ICA believed him to also be attending the opera, but is actually absent from the location for unknown reasons. Following 47's departure from the opera house he is recognized by Fournier and shot in the abdomen. As 47 recovers in a hotel, Fournier tracks him down and launches a GIGN raid on the hotel in an attempt to kill him. 47 evades the GIGN and kills Fournier, fulfilling the entire contract.

In Curtains Down, D'Alvade is often on stage rehearsing an execution scene for Tosca, in which his character is shot to death with a prop gun. The prop gun can be switched with a real pistol in order to kill him. In between rehearsals he returns to his private dressing room for a time before resuming. Should he die onstage before Delahunt is killed, the latter will rush onto the stage and mourn his loss.

A photo of D'Alvade is seen in the Shadow Client's tornado shelter on the private militia training site in Colorado in the mission Freedom Fighters, among photos of other targets that Agent 47 has previously killed. 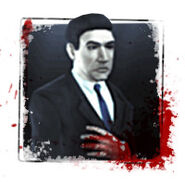 Ad for Tosca in A Vintage Year newspaper. 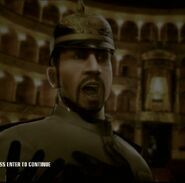 Picture of Alvaro in newspaper after death.

Alvaro tied up during his performance. 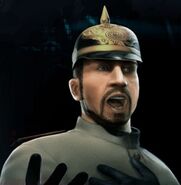 Alvaro D'Alvade as seen in the mission loading screen.

47 aiming his sniper at D'Alvade.
Add a photo to this gallery

Retrieved from "https://hitman.fandom.com/wiki/Alvaro_D%27Alvade?oldid=78299"
Community content is available under CC-BY-SA unless otherwise noted.