Arkadij Jegorov (Russian: Аркадий Егоров, and also known as "Boris Ivanovich Deruzka"), was an international gunrunner born in 1930 in Semipalatinsk, Kazakhstan. He was also one of Agent 47's five fathers

He has a brother, Sergei Zavorotko, who lured Agent 47 out from his retirement.

Under the harsh poverty conditions and scrutiny of the local and loyal apparatchiks, he cultivated a strong hatred for the communist regime. His journey down the road to crime began at the age of 15 when he started stealing weapons from the Soviets and selling them to Cossack nationalists.

His father saw fit to turn him to the authorities; however, Jegorov eluded the police and went into hiding in the mountains before making his way to Marseilles, where he would join the French Foreign Legion in 1950. By the end of his service in 1955, Jegorov had established a gun-running route through Turkey and Iran. His gunrunning activities continued after he left the league, culminating in his going into business with the Russian mafia in the mid 1980s and building up a gun-trafficking operation that covered most of the world.

In Hitman: Codename 47, he is making an arms deal with a local bikers gang and his ship's whereabouts within the harbor are unknown. 47 locates him via tracking device in the money briefcase used by the bikers to pay Jegorov, then he infiltrates the heavily guarded dock in the dead of night, eliminates Jegorov and neutralizes a nuclear bomb on board his ship.

In Hitman: Contracts, while attempting to purchase a nuclear bomb, Jegorov was intercepted and surrounded by the Dutch police force and special operations on board his cargo ship. Arming the nuclear device, Jegorov threatened to detonate the device if he was not allowed safe passage out of the area via helicopter. Despite this, 47 was still able to assassinate Jegorov and disarm the nuke.

Although he is aged 66, Jegorov looks much younger than he is because in exchange of money, Ort Meyer provided him with fresh organs for his project.

Smuggling: Jegorov have managed to cover up most of his activities on guns from the police for such a long period of time.

Military Training: Jegorov was trained by the French Foreign Legionnaires in hand to hand combat, military tactics, firearms, and explosives.

Height comparison of Jegorov and Agent 47 in Contracts 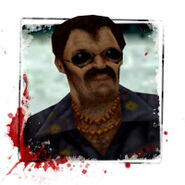 Boris fleeing in his stretch limousine.

Boris attempting to detonate the bomb.

Boris as seen in the target footage video.

Arkadij Jegorov in a tank.
Add a photo to this gallery

Retrieved from "https://hitman.fandom.com/wiki/Arkadij_Jegorov?oldid=77080"
Community content is available under CC-BY-SA unless otherwise noted.