The Asylum is a location featured in Hitman: Codename 47 and Hitman: Contracts. A letter from Dr. Ort-Meyer to Pablo Ochoa from 1999 mentions the city in which the building is located is Satu Mare, in northern Romania.

The asylum first appears in Hitman: Codename 47, where it is the setting for the missions Training, The Setup and Meet Your Brother. Upon entering the asylum, the visitors will be greeted by an orderly, who may let them in. The interior of the asylum is quite large, containing two floors and an attic. Both floors of the asylum contain cell blocks for the purpose of housing patients. The second floor also contains a operation theater and a TV Room, in which Agent Smith could be found during the penultimate mission of the game, The Setup. Under the asylum is a secret lab, operated by Dr. Ort-Meyer and guarded by two asylum orderlies.

It is in this lab where Ort-Meyer conducted his secret experiments. The labaratory has several basements, which contain shooting ranges, a maze for training in reflexes and a special room to house 47. During the first mission of the game, Training, 47 makes his way through these basements. During the final mission of the game, Meet Your Brother, 47 is involved in a shoot-out with 13 No. 48 clones, after which he drags the body of one of them to a special room with a scanner machine, which, after scanning the barcode at the back of 48's head, opens a door to a corridor leading to an autopsy room, where 47 confronts Ort-Meyer and kills him. The asylum houses dozens of patients and several orderlies and doctors, like Odon Kovacs.

The asylum appears briefly in the opening cutscene of Hitman 2: Silent Assassin, where Sergei Zavorotko, the brother of Arkadij Jegorov, one of the 47's fathers, and the Mystery Man explore the security tapes of the asylum to learn that 47 is infact a real person and not an urban myth. Sergei is amazed at 47's speed and strength (although he comments that 47 is probably not as strong as him) and sets out on a mission to make 47 come out of retirement and work for him.

The asylum appears once again in Hitman: Contracts. This time it is the setting for the first mission, Asylum Aftermath, which shows the events that took place after the final mission from Codename 47, Meet Your Brother. The mission starts with Agent 47 standing next to the body of Dr. Ort-Meyer. 47 then makes his way through the Labaratory, which is filled with the dead bodies of his brothers, who he killed and asylum patients who broke into the labaratory. Upon making his way to an elevator, 47 goes up into the asylum, and escapes from the attacking SWAT officers by stealing Dr. Ort-Meyer's car.

The map of the 1st floor.

The map of the 2nd floor.

The map of the attic.
Add a photo to this gallery 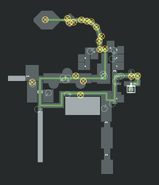 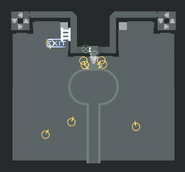 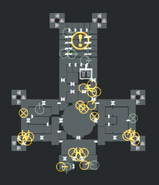 The map of the 1st floor. 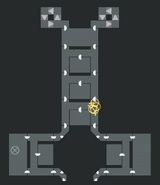 The map of the 2nd floor.
Add a photo to this gallery

The operation center as seen in Hitman: Contracts.

The White void room as seen in Hitman: Contracts.

Catwalk as seen in Hitman: Contracts.

Scanner as seen in Hitman: Contracts.

One of the many surgery rooms found throughout the asylum as seen in Hitman: Contracts.

The elevator for the first and second floor as seen in Hitman: Contracts.

The patients rooms on the first floor as seen in Hitman: Contracts.

Sergei Zavorotko and the "Mystery Man" outside the Asylum as seen in Hitman 2: Silent Assassin intro.

Agent 47 and Ort-Meyer's dead body on the floor in the white void room.

The room outside of the void, as seen in Hitman: Contracts
Add a photo to this gallery

Retrieved from "https://hitman.fandom.com/wiki/Asylum?oldid=84482"
Community content is available under CC-BY-SA unless otherwise noted.