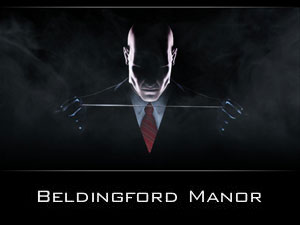 The level begins at the end of a park. Quickly go around the stone arch right in front of you, go right along the reed almost as far as possible, then turn left and move forward hugging the wall (but go around bushes and trees that you come across). Keep moving and you should stay out of sight from the guards. You'll find a door in the wall that leads to a tennis court. Go along the wall to the right and you'll see a guard walk into view. Wait for him to turn back and either let him go, or sedate or kill him for his uniform. It won't help inside the manor, but makes walking around the park so much easier. Regardless, go down the stairs the guard walks down to the boxes and the manor will be to the left. Be careful not to step into the open here since there is a sniper in the loft in the house across the stairs. If you have a disguise, go past the house and up the road patrolled by two guards. If you don't, you can simply go around the stone wall to the left of the stairs, go up the hill, along the wall until you get to some bushes. From there, wait for the guards to look away, then go around the bush and through the door on the left. You will now be in an area where a lot of white sheets have been hung up to dry. You can enter the manor either by climbing the nearby ladder to the second floor or by sedating or killing an indoor guard who occasionally steps outside and take his uniform as a disguise.

Alternatively, at the start you can wait for the two guards to finish talking and garrote the one who walks left, drag his body either to the end of the tree or to where you spawn(depending on how quickly you take him out). Then walk to the left, go forwards, avoiding the guards pass the door leading to the front entrance and proceed to enter the courtyard with the white bedsheets and take the guard out who occasionaly enters.

The senior Beldingford spends his time in his bedroom on the second floor. If you entered with the ladder, you can enter it through a secret passageway in the bathroom where the maid showers. To lure her away, go downstairs through the door when the guard isn't watching, go through the door on the left and then go left again. You'll be in the boiler room, where you'll also find a can of gasoline that can be used to kill Alistair later. Turn off the boiler to kill the hot water, skip the cutscene, then quickly go out the door, up the ladder and through the secret passageway: the mirror. The passageway leads right to the bedroom, where Beldingford will alternate between walking around and going to sleep in the bed next to the maid.

Because you'll wake one of them up if you walk or run, you'll have to sneak when you're close to them. Kill Beldingford either by poisoning his glass of milk (though you'll need the dose to kill Alistair) or by taking the pillow at the bed's foot end and suffocate him with it while he sleeps. The maid won't wake up this way.

If you are replaying and have a silenced sniper rifle such as the W2000 Sniper and have sneaked into the stable whose windows faces the manor, it's possible to snipe Beldingford through his bedroom window. The vantage point is marked by a POI. The shot is a bit difficult since Beldingford moves around a bit and can only be shot when he is not lying on the bed.

It is also possible to wait for him in the bathroom he frequently visits opposite his room and kill him with the fiber wire.

Alistair, the son, will spend his time in a living room with a member of the hunting party, making it difficult to kill him discreetly on your own. He can be killed either by being poisoned or being firebombed.

Poisoning him is one of the few ways to avoid killing a lot of bystanders and lowering the rating. You do so by taking the vial of poison from the second floor bedroom and poisoning the whisky cask in the basement; in order to get there, you'll have to take a secret passageway in the eastern part of the manor. You can also sedate the butler (who counts as a civilian), disguise as him, fill a caraffe with whisky yourself, poison it and serve it to Alistair if you do it quickly enough.

A less discreet and more fatal way is to take the gasoline from the boiler room, take the secret passageway in the bookshelf in the room adjacent to Winston Beldingford's bedroom and take the ladder up to the third floor. There is a hatch that leads down the chimney to Alistair's living room fireplace on the wall. If you drop the gasoline down it, it will explode when it reaches the first floor, killing not only Alistair and the hunting party member, but also a lot of other NPCs, lowering the rating.

He can be killed silently when sitting in his chair, either by a firearm, the Fiber Wire or another melee weapon. His drunk companion will not notice, however, it is crucial that the butler or Alistair does not see you.

Northcott is held in a southern-most room in the stable behind a locked door. There are a few guards inside, but they don't go to the stables, though a stableboy will patrol the area. The best way to get access to the key is to go to the western-most wall on the outside (avoid guards if you don't have a disguise) where there is a utility box. Disabling it will cut the feed on the TV in the guards' room and cause them to go outside. The key to Northcott's pen will be hanging on the wall. Take it before the guards come back. Because the horses will make noise if you walk or run in front of them, you have to either sneak past them or take the can of weedkiller from a nearby room and pour it into the water cistern in the western room, killing all of them. Once you release Northcott, he will escape on his own.

If you don't have a guard disguise, put weedkiller in the water and wait for the stable boy to discover the dead horses. He will go up the wooden stairs and sit with his back to you, crying. Use the syringe and obtain the stable key. Now free Northcott and escape quickly, before the stable boy wakes up.

Once you're done, go back the same way you came to the boat. If you have a disguise that's allowed outdoors, it will be much easier.