View source
watch 02:59
Wiki Targeted (Games)
Do you like this video?
Play Sound

Campbell Sturrock a.k.a. The Meat King is a Scottish crime boss who emigrated to Romania and became a slaughterhouse entrepreneur (his own slaughterhouse is the largest in Romania).

He used to live in Scotland until he emigrated to Romania.

The young woman's father contacts the ICA, and 47 is given the contract. His assignment is to rescue the daughter from the slaughterhouse if she is still alive (and bring back proof of her death if not), and then to assassinate Campbell Sturrock and Andrei Puscus. Oddly, despite being revealed as the actual killer, Malcom is never a target. Sturrock is found in a living quarters on the second floor, where he lays in bed with two leather-clad prostitutes and is brought entire roasted chickens many times per day.

He is bald white male. He is morbidly obese and wears a red shirt, thong, and black nail polish. He also wears black shoes and grey socks.

It is known he has a very gluttonous personality, as can be seen from the fact that he likes to eat meat (especially chicken) a lot. He apparently prefers to eat alone; if he is brought food, he will tell the two prostitutes lying with him on his bed to leave. If he sees through 47's disguise he will panic and call for his guards. 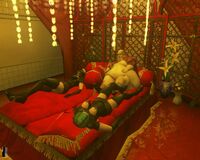 Sturrock with prostitutes lying on bed. 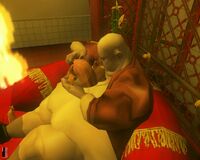 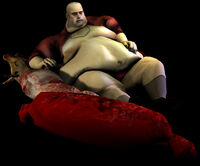 Campbell Sturrock a.k.a. "The Meat King". 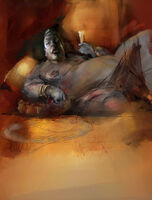 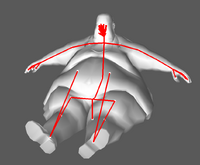 The Meat King's skeleton, viewed through a 3D model viewer.