Carlton Smith is a recurring ally throughout the Hitman franchise. He is a completely inept Central Intelligence Agency agent, who is constantly being captured, tortured and eventually rescued by Agent 47. Sometime between the years 2006 and 2019, he left the CIA to join Interpol.

It's unknown how he joined the CIA, but in 2000, he did undercover work at the Wang Fou Restaurant, led by Chinese Triad leader Lee Hong, who led one of the biggest Triads in Hong Kong. Before being captured by Lee Hong's men, he reported a vast tunnel complex beneath the restaurant.

Several weeks later, he was freed by Agent 47, whom he gave valuable intel about the location of the Jade figurine.

The same year, he was investigating the asylum in Romania only to be drugged and left him weakened. Fortunately, 47 found him and cured him using an antidote. Smith helped 47 by revealing a secret entrance to Ort Meyer laboratory by using the elevator.

Two years later, in 2002, he was again captured during his work by General Mikhail Bardachenko, who stripped him to his boxers and tortured him in the basement of the military facilities just off Nevsky Prospek. He was again freed by Agent 47, who killed his interrogator. He then proceeded to flee with Agent 47.

Later this year, the was tasked to spy on the Gurdwara cult. Unfortunately, he was discovered, and the cult master sent five assassins, after him, two of who were old associates of his. After being found by Agent 47, he laments over his humiliation of the previous three times 47 had to save him, and bargains with him - he provides 47 logistics in exchange for killing two of the assassins.

In 2004, Agent Smith went undercover in a rehab clinic in Northern California to spy on three New Yorker Mafia members, but Mark Parchezzi III (disguised as a doctor) confined him to the mental ward. He was rescued by Agent 47 on March 31, and provided him the photo of the target.

On August 15, 2005, he contacted 47, to order the hits on Daniel Morris and Mark Parchezzi III, in the White House, going so far as to provide 47 with the briefing for said mission.

During the years 2005 to 2019, he left the CIA to join Interpol. In 2019, Smith has been assigned to investigate illegal organ harvesting run by Dr. Katashi "The Curator" Ito (a journey that took him to Rio de Janeiro at one point), and had gotten very close before Ito captured him and held him captive in one of the body refrigerators in the hospital morgue. Smith, thanks Agent 47 for freeing him again, rewards him with an RFID card that can open every door at the GAMA facility.

A few months later, 47 or Knight or Stone can find Smith in a cargo container in Hantu Port, Singapore by shooting the lock off from a distance.

In Perm-14, Sibera, Smith was found in locker 137 by 47 or Knight and Stone by shooting out the locker same way from SIngapore. Smith in return helps the assassin(s) to kill any targets by sniper shot from the guard tower.

Smith dons a more professional look. He is older with white hair and seems to have lost his habit of always being in trouble. 47 arranges a meeting between the two of them and Nika in a diner. Smith sits opposite to Nika, who holds several files, while 47 talks via a cellphone from a sniper's nest across the street. 47 proposes to kill Udre Belicoff in exchange for a "small favor" from the CIA. After killing Mikhail Belicoff, 47 is arrested by Interpol. However, in transit, the vehicle is stopped by the CIA for a period brief enough for 47 to escape and it is not until this time that it is revealed that this particular CIA agent is Agent Smith. He is portrayed by the actor James Faulkner.

Smith is generally friendly towards Agent 47, however 47 is far from warm towards him, as he constantly has to rescue him. Once, Agent 47 even held him at gunpoint and threatened to kill him (in the cutscene following A Dance with the Devil). Smith pays 47 with diamonds to stop the assassination of Tom Stewart, the President of the United States. Agent Smith is quite patriotic, as seen by his American flag boxers and how he referred to his contract on Mark Parchezzi III and Daniel Morris as "for the greater good of America". 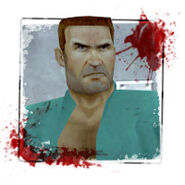 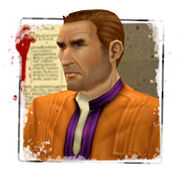 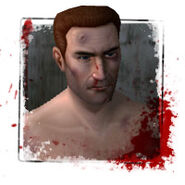 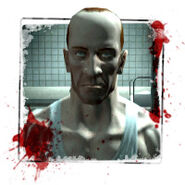 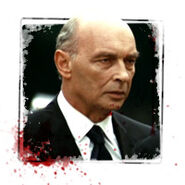 Agent Smith as seen in the 2007 film Hitman.
Add a photo to this gallery

The bartender tells 47 about Agent Smith being held in the basement.

Agent Smith being tortured in the basement.

Smith's underwear of US flag boxers

Agent Smith helps Agent 47 in reaching the basement where Professor Ort-Meyer is hiding.

Agent Smith being surprised and amazed at being saved by Agent 47.

Agent Smith sending Agent 47 in the hunt for the assassins.

47 preparing to inject Agent Smith with the experimental serum.

Waking Agent Smith up with the antidote.

Agent Smith wakes up and runs away with Agent 47. No side-effects.

Agent Smith in boxers, in HITMAN™.
Add a photo to this gallery

Retrieved from "https://hitman.fandom.com/wiki/Carlton_Smith?oldid=94525"
Community content is available under CC-BY-SA unless otherwise noted.