Carmine DeSalvo is an Italian-American mafioso, and primarily an arms dealer working out of Central America.

"Due to a recent shift in the delicate power balance of the New York families", Agent 47 may have to kill him as a primary target in the mission: Flatline. If not, then he will be an optional secondary target worth 50,000.

DeSalvo is a 45 year old caucasian male weighing 140 lbs and standing at 6,2 ft. He has short black hair, but no facial hair to speak of. He also wears a green patients robe.

A notorious smuggler of illegal arms from Central America. Being under constant scrutiny by different domestic intelligence sevices as a prime suspect in the ongoing investigations around, he was somewhat hampered in his efforts to contact of prospective clients. As a result he became a little jittery and develped substance abuse and drinking problem, which is why has been admitted to the remote Rehabilitation Center for treatment.

In addition to substance abuse in the form of alcoholism, Carmine has very serious and apparent anger management issues. Carmine claims that the therapist (disguised as 47) and him should be having a session when approached. He states this in a very angry tone, and his anger issues are solidified during the therapy session.

When speaking to DeSalvo during a therapy session he states,

I've always been a real angry person, you know? Anger, that's like a drug, you know? I mean, it gets in your blood an-and it boils in your head. It gets i-it, you can't see straight. Y-you can't talk like normal without wanting to twist a fuckin' head. Li-like a, like a bottle cap, you know? And the booze, I mean, I know what they say, but the booze, it calms me down. You know what I mean?

His way of coping with his anger management issues are through constant exercise in the gym of the Rehab Clinic. 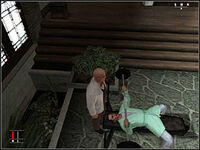 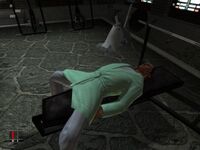 Retrieved from "https://hitman.fandom.com/wiki/Carmine_DeSalvo?oldid=84162"
Community content is available under CC-BY-SA unless otherwise noted.