There is no challenges article for this mission. Lend a hand and write one.
Curtains Down is the third mission of Hitman: Blood Money. Agent 47 is sent to Paris and assigned to kill the eminent opera actor, Alvaro D'Alvade and an American ambassador, Richard Delahunt. D'Alvade is in the middle of rehearsals of a production of Tosca at the Paris Opera House, and Delahunt is also present observing his rehearsals.

Agent 47 successfully assassinates both of his targets, Richard Delahunt and Alvaro D'Alvade. However, when he leaves the opera house, 47 is followed - and later shot - by a police officer. This event is elaborated on in Hitman: Contracts, in which 47 experiences near-death hallucinations and recovers in time to evade capture by the GIGN led by Inspector Albert Fournier, the Chief of Police. His briefing is expanded to include Inspector Fournier as a third target, and reveals him to be an accomplice of D'Alvade and Delahunt. 47 evades the GIGN, kills Fournier, and steals a police car to get to DeGaulle Airport.

Diana and 47 both escape from Paris on a commercial plane to the USA. During the flight, Diana shares information about the organisation who is undermining the ICA. 47 demands payment for his continued services, prompting Diana to reveal that the money for his fee is already under his seat.

Hello 47. We've got some business at the Paris Opera. There are two targets: The famous tenor, and Richard Delahunt, the American Ambassador to the Vatican.

Our client claims they're behind a prostitution ring trafficking in boys and girls from Eastern Europe. Tosca is still in rehearsal, so there's plenty of activity at the opera-house and you shouldn't be too conspicuous. Ambassador Delahunt watches most rehearsals from his box. He travels with an armed escort, but there shouldn't be any other security to speak of. You'll get some cover from the construction crew renovating the theater for the new season. We've also left you a pick-up at the cloak room. In the third act of Tosca, the tenor faces a firing squad.

That scene may provide a useful opportunity. It's a straightforward assignment, 47, but the Agency's been having some problems in Paris. Use extreme caution.

Alvaro D'Alvade being killed with the real pistol.

Another option is to align the shots.

Alvaro D'Alvade being sniped by 47 while incriminating the Executioner.

MP5
Carried by Delahunt's bodyguards. Found in weapon cache on the third floor.

Real WWI Pistol
Obtained from the guard at the coat check.

Prop WWI Pistol
Carried by executioner. Found in his dressing room between rehearsals.

Nailer
Carried by workers in the basement under the stage.

Hammer
Carried by workers throughout the theatre.

Screwdriver
Carried by worker near the Light Control Room keycard.

Guard
Permitted everywhere except the stage and Delahunt's private box.

Bodyguard
Permitted everywhere except the stage.

Can open carry MP5 without suspicion.

Actor
Permitted everywhere except Delahunt's private box. The rehearsal will not begin until you go onstage.

Carries Replica Mark III, which is not a real weapon and does not arouse suspicion.

Executioner
Permitted everywhere except Delahunt's private box. Can be used to shoot D'Alvade with the real WWI Pistol. The rehearsal will not begin until you go onstage. 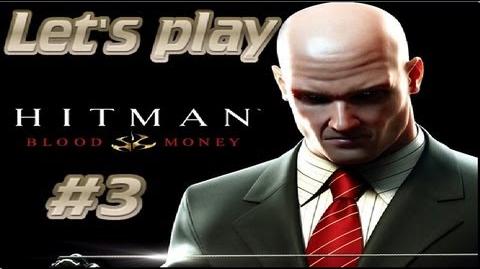