Dexter Industries is an arms and defense manufacturing corporation that was founded in Hope, South Dakota in 1958 by the Dexter family.

Blake Dexter is the head of Dexter Industries, which manufactures weapons, anti-theft systems as well as other defense systems. At the time of Absolution, it employs almost half of Hope. Because of this, most of the town is on the take from Dexter, allowing him to get away with pretty much anything. The company's factory in South Dakota serves as the setting for the missions Dexter Industries, Death Factory and Fight Night.

An advertisement in Issue 7 of Hope News Times mentions that Dexter deals in home defense systems.

The motto of Dexter Industries. 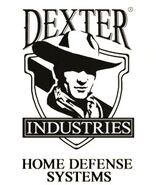 47 overlooking the factory compound of Dexter Industries.
Add a photo to this gallery

Retrieved from "https://hitman.fandom.com/wiki/Dexter_Industries_(organization)?oldid=81280"
Community content is available under CC-BY-SA unless otherwise noted.