Elusive Targets is a target-based gameplay concept introduced in HITMAN™ and also used in HITMAN™ 2 and HITMAN™ III.

Elusive Target(s) missions are unique, as they will only appear once, and if the mission ends in any way, other than restarting, they cannot be attempted by the player again. So far, they've appeared at a rate of about once every few weeks.

The target cannot be seen on the map or through Instinct Mode, but the briefing gives mediocre clues about their location and antics, which mostly consist of their background. The level can also be modified during the mission to seal off certain areas that are available during normal gameplay, and can also contain extra guards.

When a new target is added to the game, players only have a limited time (initially for 48 hours, though the norm has since become 10 days) to compete in the mission, or it'll be lost.

After completing varying amounts of Elusive targets, the player will unlock new suits for Agent 47 to wear. Some suits are based on Agent 47's earlier suits, worn in the previous games of the franchise. All unlockable suits can be worn in every game mode and level (excluding tutorial levels and Untouchable), but the changes are mostly cosmetic, with some characters making snarky comments depending on your clothing. 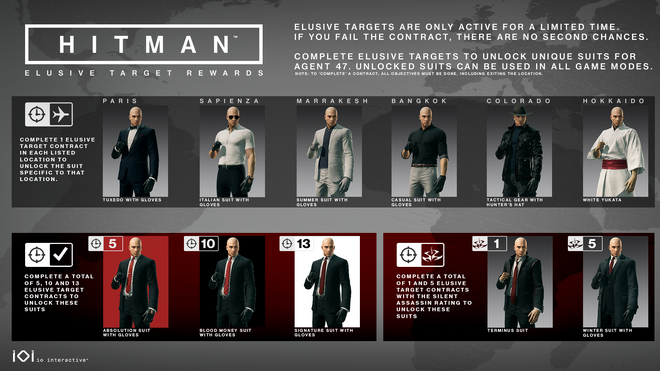 Location-specific*
Complete one Elusive Target contract in each location.

* These suits were added starting from Elusive Target 14. Progress made before that point don't count towards them.

** Players are only awarded one of the three coin types. 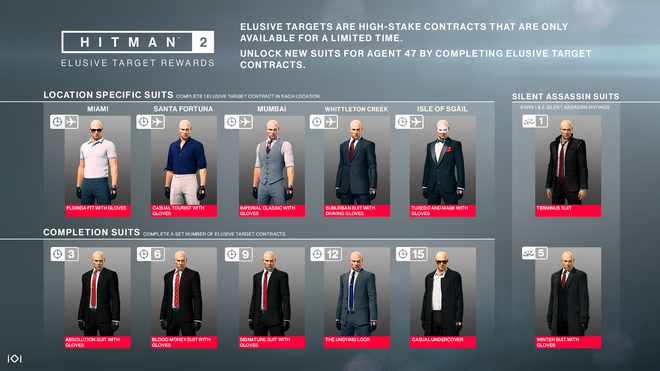 Location-specific
Complete one Elusive Target contract in each location.

Note: In the HITMAN™ 2 's October Roadmap, IOI confirmed that the Imperial Classic With Gloves would instead be unlocked by completing The Divine Descendance, as Mumbai would not be receiving any Elusive Target contracts.

*Players are only awarded one of the three coin types.

Year Two versions of elusive targets were available for all players, including those who had eliminated, failed or missed either or both activations; this was to allow Steam players to play the elusive targets they missed during EGS' one year-exclusivity deal. These elusive targets are exactly the same, and even come with the same, but seperately unlocked, challenges. The name change was presumably to circumvent the lock-out players would have if it was just a second iteration of the targets, even though this also included legacy elusive targets which hadn't repeated.

The Stowaway Legacy Elusive Target was mistakenly reactivated and playable for a short period of time after the February 2021 (v3.11) patch was released on February 23rd, before the in-game tile was updated with The Deceivers as intended.

On October 24th, 2017, iOi announced the return of the elusive targets[1] to be available for purchasers of the newly released Game of the Year Edition. This re-activation would allow players to try any elusive target that they didn't finish on the first appearance. If a target was killed or the mission was failed, they would not return. Sergei Larin would be the first target reactivated on November 17th, 2017. During their first activations, most elusive targets were active for around 72 hours. Most re-activated elusive targets are active for 10 days. The announcement showed a montage of elusive targets, but Gary Busey was notably absent; this was later revealed to be the result of contractual issues. The reactivations have deviated from the original release order. The Guru, which was originally the sixteenth target, was reactivated as the ninth target to coincide with the release of HITMAN Spring Pack (a free release of Sapienza). The Pharmacist, the tenth target originally, was also held back as the result of a bug which was fixed in the v1.33 patch and was announced to be added back into the reactivation queue.

On November 30th, 2021, as part of the Winter Roadmap, HITMANTM III Elusive Target reactivations were announced. The first reactivation occurred on December 3rd with The Ascensionist, and continued with the other season 3 elusive targets starting every Friday for 6 days each until January 19th, 2022. The Ascensionist was first due to Dubai being in the free starter pack at the time. Legacy Elusive Targets were not included.

On May 5th, 2022, as part of the Year 2 May Roadmap, the very first Reactivated Legacy Elusive Targets were announced, as well as the first standard elusive targets of any kind to have two activated at once. These, like all reactivations, were not playable if you completed or failed them the first time round.

Etta Davis, "The Angel of Death"

The Censor, "The Serial Killer"