watch 04:21
Wiki Targeted (Games)
Do you like this video?
Play Sound

Frantz Fuchs is one of Agent 47's five fathers and a leading member of the infamous terrorist group, Fuchs Brothers. He becomes a target in the mission Traditions of the Trade.

International terrorist Frantz Fuchs was born in Linz, Austria in 1929 where he spent his formative years nurtured in violence by his father who, when World War II broke out, encouraged the young Frantz to join a different youth organization that had uniforms, instilled hatred in his mind and provided his son with weapons to play with. Frantz's violent paradise was shattered, however, when the Nazis fell to the Allies. He fled to Marseilles where he joined the French Foreign Legion and quickly rose in the ranks as he continued to hone his talents in explosives and assassination. After he left the service in 1955, Fuchs continued to practice his brand of terrorism and established a name for himself as one of the world's most dangerous mercenaries.

Unlike other 47's five fathers, Frantz is the only one who does not employ an extensive amount of bodyguards, instead relying on only two personal bodyguards. His unpreparedness eventually leads to 47 being able to confront him in his room. Additionally, he surrenders the moment 47 appears without any attempt to retaliate, something that 47's other fathers do not do.

"Dear friends; I must support the new thoughts on our project. I'm sick and tired of waiting for this old man. As you know my work needs a steady hand and sharp wit. And I'm not getting younger. Therefore I support the idea about splitting the fruit. Let's split the fruit while we can still savor it! Blood and Muscle, Frantz."

In Traditions of the Trade, he and his brother, Fritz Fuchs, intended to set off a chemical bomb at a GM summit held in the Thermal Bath Hotel. However, under a request from a client (which later is known to be Otto Wolfgang Ort-Meyer), 47 killed both of them and took the bomb before they could go through with their plan.

Military Training: Fuchs was trained in the French Foreign Legion in hand to hand combat, military tactics, firearms, and explosives. This made him efficient as an assassin and mercenary.

Demolition Expert: His military training have honed his knowledge and skills on explosives which made him one of the world's most dangerous mercenaries. 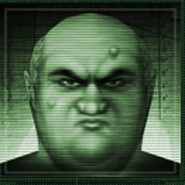 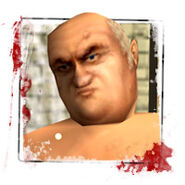 Frantz as seen in Hitman: Codename 47.

Retrieved from "https://hitman.fandom.com/wiki/Frantz_Fuchs?oldid=95819"
Community content is available under CC-BY-SA unless otherwise noted.