The Fusil G2 is an automatic-fire carbine found on many bodyguards in HITMAN™.

Its predecessor, the Fusil G1-4, is chambered for 5x56mm rounds.

The G2 is one of 2 rifles seen in HITMAN™. Mostly, it can be seen carried by bodyguards, while soldiers are seen with its predecessor, the Fusil G1-4.

You can find the weapon in the little house right next to you on the left side, straight away after spawning. Inside the house you are also able to find the Bartoli 12G shotgun.

Level 0
Add a photo to this gallery

The Fusil G2 is carried by Soviet soldiers. 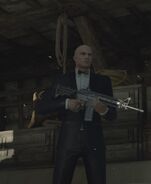 47 equipped with a Fusil G2.
Add a photo to this gallery

Retrieved from "https://hitman.fandom.com/wiki/Fusil_G2?oldid=74063"
Community content is available under CC-BY-SA unless otherwise noted.