< Hitman: Absolution
View source
watch 02:52
Roblox: DeepWoken - The Loop
Do you like this video?
Play Sound

This page lists all Easter eggs in Hitman: Absolution.

In this mission, there are two shell statues; one on the second floor balcony, to the right after heading up the stairs, and one on the ground floor next to the piano.

To trigger the easter egg, open the blinds using the console upstairs, then head downstairs and stand to the left of the piano so the water outside can be seen. Turn around and shoot the two shells, and then turn back around and glance out the window. Keep your eyes and ears open...

In the mission A Personal Contract, The song that the guard tries to play on the "out of tune" piano is the Tomb Raider theme.

In the mission Birdie's Gift, the floor mat that Agent 47 stands on to compete in the shooting match features the word "CROFT", also, in the duck hunt range, there's a large travelling bag on a couch, with a "Croft' banner on it, paying homeage to Lara Croft from the popular Square-Enix title Tomb Raider.

A Dance With the Devil

Missions: The King of Chinatown; One of a Kind

Two easter eggs relating to the Hitman: Blood Money mission A Dance with the Devil can be found, with one occurring twice.

Another two easter eggs relating to the mission can be found in the basement of Tommy the Tailor's shop in One of a Kind. The first is the mask worn by Anthony Martinez. It is on the central rack on the second shelf from the top, near the desk. The second is a calendar on the back wall of the basement depicting Eve.

The masks in Chinatown.

Location of the mask.

Eve from the Heaven Party.

Around the Terminus Hotel, three variations of the Electrician disguise can be found; one with a hardhat on, one with a baseball hat, and one with no hat on. The name badges of these different variations read Faraday, Franklin, and Walesa, respectively.

Michael Faraday was an English scientist who first invented the generator. Benjamin Franklin was an American scientist and inventor who studied electricity intently, and even invented the lightning rod. Lech Wałęsa was the president of Poland and his upcoming was through the electrician trade. 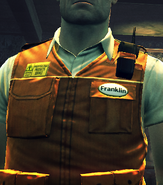 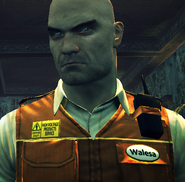 Developers and Mini Ninjas at the Orphanage

Once in the orphanage halls, head down the stairs immediately to the right after exiting the elevator shaft, and head left through the doorway at the base of the stairs. Turn right, and on the reception desk is a registry book. Written on these pages are the names of several employees who worked on Absolution. This is the list:

A statue picturing Hiro, the first playable character and hero of the game is displayed on a drawer facing the door which allows you to access the lift's alimentation (which you need to enpower with fuses) in the second part of the mission.

The registry book on the desk.

This easter egg is a play off of a blooper in Blood Money; in the mission A Dance with the Devil, in the kitchen by the Hell Party, there is a kitchen crate with a lobster in it with the description of "Allan please add details". The details were, quite obviously, forgotten.

In Absolution, achieving a score of 666 while in the shooting contest to win back 47's Silverballers, a message will be displayed once the match has ended.

The first appearance of this duo is Lynch on the firing range of Birdie's Gift. He is seen firing the only M590 12ga in the mission. His dialogue is quite interesting, and we find he hates gnomes with a passion. Additionally, the worker behind the counter in the gun shop can be overheard while talking to a man searching for shotgun ammo, referring to Lynch as "that nutty guy," along with a slew of other comments.

Kane makes his debut in the mission Welcome to Hope. He is seen standing next to the jukebox smoking a cigarette. He can be overheard talking about Lynch, saying that his partner is in town purchasing "business equipment." One of the bikers vaguely threatens him, and he says he doesn't want trouble. If the player sabotages the jukebox, two bikers will come at Kane, and he will knock both of them out, subsequently triggering a bar fight.

Lynch makes his second cameo appearance in the mission Dexter Industries, within another easter egg. After triggering the nuke easter egg, Lynch can be seen sitting in the desert listening to music while two women sunbathe.

Kane makes his second cameo appearance in Skurky's Law. After entering the holding cells, look for a doorway on the right leading down to a storage room. Once in the storage room, climb through the vent on the wall, inch forward, and peek through the vent. He can be seen sitting at a table, writing a letter to his daughter Jenny by candlelight. He claims he is not remorseful or scared of dying, but he holds a great amount of regret since he will never get to know her. This is the opening scene for the game Kane & Lynch: Dead Men.

Lynch on the firing range.

Kane standing near the jukebox.

Lynch in the desert.

Kane writing a letter to his daughter.

Mission: End of the Road

There are a total of five vultures in the mission. In order to trigger the easter egg, they need to be forced into the air by running close to them. After all five are in the air, shoot them down, and look off in the distance southwest of the car. If Lenny is still alive, he will step into the truck's path and get hit by it.

Mission: End of the Road

There are a total of three Dog's Bone in the mission; one in the grave Lenny Dexter digs, one near a dog corpse in the middle of the area, and one on top of a makeshift grave out in the distance, northeast of the car. To trigger the easter egg, collect the two bones that are not in the grave and toss them in. Please note that this easter egg's effects dissipate after Lenny is killed.

Once reaching the factory compound, in the main lobby just before the elevator, a nuke is suspended above the reception desk. Shoot the tip of the nuke to trigger a short cutscene, where Lynch makes his second cameo appearance. Please note that the mission ends after this is triggered.

After making it to the land mine testing zone, follow the wall left against the fake houses, and take the door leading behind the props. Turn left, and against the back wall is a pig standing inside a crate behind a bowl of food. Shoot the pig to trigger the easter egg.

The pig to look for.

The Acts of Blood Money

Mission: One of a Kind

On the right walls of the basement, immediately after entering, there are several newspaper clippings on the wall. These articles mention Alvaro D'Alvade, Vinnie Sinistra, Mohammad Bin Faisal Al-Khalifa, and Joseph Clarence. An article searching for Agent 47 can also be found in the center, and another article referring to a woman being brutally murdered in her home. There are also the newspaper clippings related to the background of Joseph Clarence, a.k.a. Swing King.

Once reaching the crematorium to face off against the Praetorians, you will find numerous angel statues scattered across the level. To trigger the easter egg, destroy each and every angel statue. Keep checking the sky; once you have destroyed the last one, a second rainbow will appear.

Some of the angel statue variants.

When you click on the "Contracts" menu in Hitman Absolution, i.e. when you want to create or play contracts, on the backround a continous running screen shows ICA files. On these are names of 47's previous targets, Diana, and Travis. Common names that appear are Hendrik Schmutz, Tariq Abdul Lateef, Mohammad Bin Faisal Al-Khalifa, the targets of Hitman: Blood Money, and photos and names of the 4 Russian generals, targets of Hitman 2. Technically, Hitman: Absolution is crediting all previous games except Codename 47. Hitman: Contracts is credited by "Contracts mode" and the mission "Hunter and Hunted".