Hitman: Sniper (commonly abbreviated to "Sniper") is a mobile game published and developed by Square Enix Montreal, and is their second Hitman mobile game after Hitman GO. Sniper was originally released on the iOS App Store on October 2nd, 2014, and was removed from it somewhere before January 17th.

Gameplay in Sniper is split up into two sections for the two different mission packs; Montenegro, which is the main set of the game, containing all the targets, missions, rifles and upgrades, and Death Valley, which is an unlockable, expanded three-stage mission set in which you must protect an anonymous figure named Ben from hordes of infinite zombies.

While the basic concept of how Agent 47 plays is the same, each mission set has its own rules.

Montenegro is the basic starting set for Sniper, and is what the game first forces the player to play when launching for the first time.

Montenegro is a one-level pack, which contains a variety of challenges (which are deemed "missions") about assassinating various NPCs on the level, whether this pertains to killing characters with accident kills, or straight up killing one of the targets for a score.

While the default starting rifle is the Izanami, the player may choose whichever rifle they wish from a wide selection in the pre-mission armory. These rifles may be unlocked as the player progresses (and gains weapon parts from a "weapon roulette" at the end of each mission), or can be purchased for real money. Some rifles, such as the Jaeger, give the player various boosts (such as giving a 50% discount on all Death Valley upgrades). All rifles, when using in-game currency, can be upgraded to increase various aspects like fire-rate and stability.

Death Valley is an expansion pack, which contains a three-level system and various upgrades, and introduces tokens from the basic money Montenegro uses.

Death Valley has the player protecting an anonymous man named Ben, whom is trying to repair his car but is being harassed by hordes of zombies. The player's job (on Normal and Hard difficulties) is to protect Ben at all costs until he can get his car up and running, while Expert difficulty has the player defending Ben against infinite hordes, never to fix his car.

Death Valley also introduces the new token system, which came with a new upgrading system. When a player completes certain tasks in a mission, that unlocks the upgrade for purchase, which can be bought with tokens earned at the end of each Death Valley mission. The prices of these upgrades stack at around 2,500 to 3,000+, and are usually pretty poor-quality.

While neither Montenegro nor Death Valley contain a cohesive plot, both can be generalized by their gameplay. Montenegro places the player inside the first-person perspective of Agent 47, on top of a mountain sniping various members all staying at a building in Montenegro. Diana spectates Agent 47 for every mission, giving him compliments and confirmations throughout depending on his actions.

Death Valley places Agent 47 protecting an anonymous man named Ben, and must protect him alone while he's repairing his car so he may escape from the hordes of zombies pursuing him.

The game received "generally favorable" reviews, according to video game review aggregator Metacritic. Gamezebo named the title among the best mobile games released in June 2015. Reviewers praised the cleverness and minimalism of its puzzle design, but wanted more variety from its activity-dense scenarios. They noted how they came to know the characters intimately after memorizing each character's routes and remembering how they respond to different kinds of coaxing. This predictability felt great, the TouchArcade reviewer wrote, when he could instinctively respond to new combinations of targets, but as a trade-off, the game mechanics quickly became repetitive. The Gamezebo reviewer felt otherwise, and commended how the game's setting, despite its consistency, remained fresh and exciting as new targets and complications were added. Pocket Gamer's reviewer found the game's alternative methods for killing targets through "traps and tricks" to be the game's most interesting element.

The Gamezebo reviewer had special praise for the game's sound design and how it was used to clue the player into puzzle solutions. TouchArcade commended how the game's sparse story unfolded by watching the assassination targets go about their time at the compound. The reviewer also noted that his suspension of disbelief was broken when characters would eventually return to partying after reacting to a gunshot, but suggested that the game's Easter eggs redeemed its psychopathic qualities. Pocket Gamer wrote that the game did not reach the heights of the series' situational humor in hiding bodies stealthily. Other criticism included Gamezebo, which blamed the game's core multiplier ability for breaking the balance of the game. TouchArcade thought that the game played better on the tablet iPad than on the smaller iPhone, and praised the feature that synced game progress, since Apple's iCloud service was known for its struggle to successfully implement the same feature. Despite Square Enix Montreal being best known for its Go series, Hitman: Sniper was the studio's biggest revenue generator. As its most lucrative title, the game helped to fund the development of the Go series. 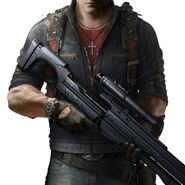 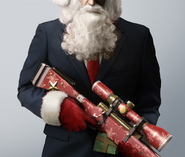 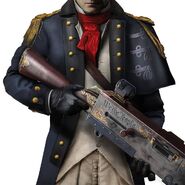 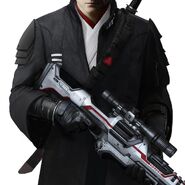 Promotional suit for Montenegro 2048 (with the Longsword II rifle).