"Get ready to pull the trigger on a completely new chapter in the award-winning Hitman series."
―Hitman: Sniper Challenge's Tagline

Sniper Challenge was announced on May 10th, 2012, after a teaser image was released on May 3rd. It was released for Xbox 360 and PlayStation 3 on May 15th, with the PC version being released on Steam on August 1st.

In Sniper Challenge, players take the role of Agent 47, who sets up in a building overlooking one where a rave is taking place, in which Strong and his guards are located. The character is armed with a silenced bolt-action sniper rifle, which is the only available weapon in the game.

The player accumulates points by killing targets. As score is earned, progress is tracked, and upgrades for the sniper rifle are unlocked, including a magazine size extension and a faster bolt cycling (increasing its fire speed). The scenery of the game includes destructible elements which can be shot to indirectly kill characters; for example, shooting a lift with barrels will crush a target with them. All versions include achievements, such as shooting a set number of Gnomes or Pigeons hidden around the level.

At the end of the game, the score of the player is uploaded to a global leaderboard (PC version requires you to be logged in with a Square-Enix logon, otherwise leaderboards are not shown and scores are not uploaded). The two highest ranking players will be granted a trip to Copenhagen, Denmark, to visit the Io-Interactive development team.

The game was advertised as featuring some connectivity with Absolution. Weapons that are unlocked in Sniper Challenge will require a second code (from pre-ordering at GameStop) in order to be carried over for Absolution.[1] However, no actual weapons can be unlocked in the game except for the Agency Kazo TRG and a few of its customizations, such as the Magazine Well and Extended Clip.

Your main target, Richard Strong Jr., is the CEO of Stallion Armaments, a high-profile weapons manufacturer. Richard Strong is an exceedingly private figure who rarely moves in public, so the best window of opportunity is during his brief appearance at the company's annual retreat. However, keep in mind that the place will be packed with witnesses.

Our client wants Richard Strong eliminated, along with his entire host of bodyguards. Apparently, he wants to send a message. Richard Strong is highly punctual, and will only mingle with his employees for fifteen (15) minutes. At precisely six o'clock, he will leave the premises, so be mindful of the time. There should, however, be plenty of opportunities for a more silent approach. I know you'll appreciate that.

The user score of the game was 86. 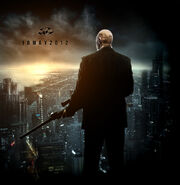 Sniper Challenge promotional render.
Add a photo to this gallery

Gameplay of the Chicago mission.

Retrieved from "https://hitman.fandom.com/wiki/Hitman:_Sniper_Challenge?oldid=61692"
Community content is available under CC-BY-SA unless otherwise noted.