"Take on the role of Agent 47 and be prepared for your most dangerous assignment.

Enter the dark underworld of organised crime as Agent 47, the ruthlessly efficient and professional Hitman. Your mission and objectives are issued by the ever present mission controller, Diana.

Can you achieve your objectives and dispatch your targets while remaining undetected? Shadows, Disguises and silent weapons are your best chances of getting through this isometric stealth adventure alive."

The plot for Vegas follows the same plotline and characters as Hitman: Blood Money but in a more graphically condensed format.

The game received mixed to poor reviews from critics, getting an average score of 5.5 from IGN and 52.5% from GameRankings. 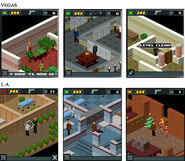 Screenshots from the game.