View source
watch 01:54
Arcane: League of Legends - The Loop
Do you like this video?
Play Sound
Hitman 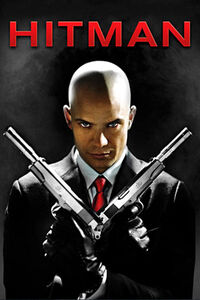 Hitman is a 2007 French-American action thriller film directed by Xavier Gens and based on the Hitman video game series. A gun-for-hire, Agent 47 is a genetically-engineered assassin. He is hired by a group, 'The Organization' and becomes ensnared in a political conspiracy. He finds himself pursued by both Interpol and the Russian military. The film stars Timothy Olyphant, Olga Kurylenko, and Dougray Scott. Hitman was released on November 21, 2007.

A reboot titled Agent 47, was released on August 21, 2015, with Rupert Friend cast as the title character.

At an unknown location, near a remote asylum, a group of young bald boys is receiving tattoos of bar codes on the back of their heads as well as men observing, directing and coordinating the training of these young boys in firearms and hand-to-hand combat, as well as stamina and strength. In these scenes, it is shown that these young boys are trained from an early age to be professional, international hitmen-for-hire.

Years later, Interpol agent Mike Whittier arrives at his house and discovers Agent 47 in his study, where the two talk about 47's life as a professional hitman, working for a mysterious unknown paramilitary organization known as The Organization. The movie unfolds as he tells the story, and Whittier trying to capture him.

Three months prior, 47 is completing a hit on a gang leader named Bwana Ovie in Niger. He is told by his Agency contact, Diana, to kill his next target, Russian President Mikhail Belicoff, publicly. He completes his mission as ordered, but before he can leave Russia, he is contacted by his employers. They tell him that there is a witness to the assassination and order him to intercept her. When Agent 47 pulls his gun to shoot her on the street, he realizes she's never seen him before. He doesn't shoot her, but just misses being assassinated himself.

His employers reveal his location to agents of FSB, who make plans to intercept him. As he is about to be taken, Diana personally calls him to warn him. She tells him that Belicoff ordered the hit on himself. After a dramatic escape from the hotel, 47 intercepts Nika, the woman who supposedly witnessed his hit and Belicoff's mistress. He interrogates her about Belicoff and discovers that Belicoff had a body double, who ordered the hit on the real Belicoff so that he could take his place as the president of Russia. 47 was to be killed after the hit to ensure total secrecy.

As Nika and 47 attempts to take a train further into the Russian interior, they are intercepted by more assassins from the Agency. 47 kills four of them before disarming Agent Whittier and wounding his partner. Infuriated at yet another escape, the FSB and Agent Marklov order Interpol to leave the country immediately. In the meantime, 47 contacts Agent Smith of the CIA. He offers Smith a deal - he will kill Udre Belicoff, Mikhail's brother, in exchange for a favor from the CIA. Udre is an arms dealer and slave trader whom both the CIA and FSB have wanted dead for some time. Agent Smith informs 47 that Udre had been planning something with a German arms dealer named Price. Intercepting him could lead 47 to Udre.

47 and Nika travel to Istanbul, where 47 abducts Price from a restaurant in order to pose as Price at a meeting with Udre. 47 later kills Udre and his henchmen, so Belicoff's double is forced to attend Udre's funeral. 47 kidnaps Agent Marklov and forces him to have his own FSB agents try to shoot Belicoff's double as he delivers a eulogy for Udre. Disguised as a soldier, 47 manages to kill all of Belicoff's double's guards and takes him into the archbishop's chamber in the church. 47 instead kills him and then allows himself to be taken into custody by Interpol and Agent Whittier.

At this point Agent Smith delivers on his end of the deal, having the agents under his command intercept the Interpol convoy that is transporting 47 to the airport, giving 47 the distraction necessary to escape. The scene then flashes forward to the conversation between Agent Whittier and 47 occurring at Agent Whittier's house. After wrapping up their conversation, 47 reveals the body of a dead hitman. 47 suggests Agent Whittier go along with 47's plan, saying that he will notify the police that he has killed the fake Agent 47, implying that Whittier will not survive if he does not.

Nika is shown picking up an envelope from an undisclosed sender. Inside it, there are papers and a message saying that she now owns a vineyard (she had told 47 of her childhood dream of having one). Meanwhile, 47 is watching her from afar, through the scope of a sniper rifle. He then looks at the corpse of another hitman, lying close to him, and says, "I told you to leave her alone. You should have listened." He then turns back and walks away.