Jade Nguyen was the tertiary antagonist of Hitman: Absolution. She was an employee of the International Contract Agency, who dreamt of rising through the ranks at the ICA, and thus, became Benjamin Travis' assistant. She is killed by Agent 47 at the Burnwood Family Tomb.

Jade's family surname Nguyen is a common last name of Vietnamese origin. Jade worked as a field assistant for Agent 47's new handler, Benjamin Travis, but hoped to rise in the ranks of the Agency. It is presumed she planned on taking Travis' position as Head of Division. According to her psych profile, she was highly ambitious and possessed a high level of strategic reasoning.

She is killed along with Travis and the Praetorians in the same day Absolution takes place. They were all killed by Agent 47. 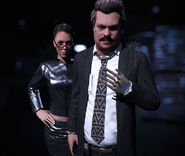 Developer render of Benjamin Travis and Nguyen; made by Tom Isaken 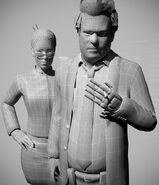 Face comparison between Jade and her voice actor, Shannyn Sossamon.
Add a photo to this gallery

Retrieved from "https://hitman.fandom.com/wiki/Jade_Nguyen?oldid=76301"
Community content is available under CC-BY-SA unless otherwise noted.