LaSandra Belle Dixon is the leader of an elite group of killers, code-named The Saints, who works with the ICA, and initiated by Benjamin Travis as one of his projects.[1]

Dixon was once an officer of the Oakland Police Department strongly considered for a position in the FBI. She was later recruited to be a member of the elite ICA team, code-named "The Saints", and became a star and potential senior manager within the organization. She is searching for and training potential new members for this group under the specific orders of Benjamin Travis.

The Saints attempt to kill Agent 47 at a motel, but she and her team suffer heavy losses as a result, as she and all of her colleagues were killed by the hitman.[2] she is the seventh and final saint to die

Dixon shown at the center of the newly formed Saints team. 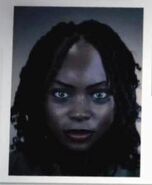 Dixon kills a man The Saints captured after receiving orders from Travis.

Dixon gloating after having killed 47. This scene will happen if the player dies while facing her.
Add a photo to this gallery

Retrieved from "https://hitman.fandom.com/wiki/LaSandra_Dixon?oldid=81584"
Community content is available under CC-BY-SA unless otherwise noted.