Lee Hong (Chinese: 李洪) is the leader of the Red Dragon Triad and one of 47's five fathers. He is the first main target of 47 and is successfully assassinated after a succession of false flag operations.

Lee Hong is the leader of the Red Dragon Triad. Probably born in 1930. Like his FFL comrades Ort-Meyer, Ochoa, Fuchs and Jegorov, he served in the French Foreign Legion from 1950-1955.

He became involved in Ort-Meyer's project, providing funding in exchange for spare organs (which is why he appears young and healthy for his age) and potentially having a clone assassin to help his operations (The real reason Ort-Meyer made clones, so they could become Providence assassins). This makes him one of 47's five genetic "fathers".

By 1999 (the year of Hitman: Codename 47), he pulled his funding from Ort-Meyer's projects believing he had gone crazy. Ort-Meyer anonymously assigned 47 to kill him. As Lee Hong had become much too powerful to target directly early on, 47 began the process of isolating Hong by instigating a war between him and the Blue Lotus Triad, to weaken both his influence and manpower; by means such as lifting his police support by killing the Hong Kong Chief of Police. Agent 47 eventually kills him, against such odds such as Lee Hong's army of Red Dragon members, his poison-tipped sword, and his personal bodyguard Tzun - who escorts him everywhere and even tastes his food. With Lee Hong dead and the Jade Figurine was gone, the Red Dragon Triad collapses into anarchy.

In the mission where you have to kill "Hayamoto Sr." (Hitman 2:Silent Assassin) if 47 approaches towards Lei-Ling, 47 will mention Lee Hong and his mansion, and he saved here there.

Master Martial Artist: Hong is versed in both unarmed and armed combat. Those abilities were honed by his military training in the French Foreign Legion.

Master Swordsman: Hong is well-versed in swordsmanship and he's known to carry his poison-tipped Chinese Sword. 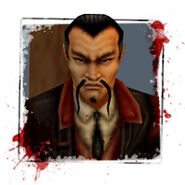 Agent 47 killing Lee Hong with his own sword in Hitman: Contracts.

Target photo of the Jade Figurine. 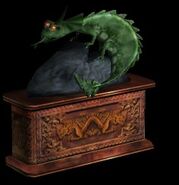 In-game image of the Jade Figurine.
Add a photo to this gallery

Retrieved from "https://hitman.fandom.com/wiki/Lee_Hong?oldid=84218"
Community content is available under CC-BY-SA unless otherwise noted.