Leonardo Isaac Dexter[2], also known as Lenny the Limp, and Limpdick Lenny by Wade, is the son of the CEO of Dexter Industries, Blake Dexter, and the leader of the Hope Cougars.

Currently, little is known about Lenny apart from his affiliation with Dexter Industries and that he is the son of Blake Dexter and his ex-wife, Margaret[3].

Lenny accompanied Wade (who had a lot of reservations about letting him tag along) during the kidnapping of Victoria from the Rosewood Orphanage, during which he accidentally killed Sister Mary. After Wade was eliminated by 47, Lenny kidnapped Victoria and brought her back to his hometown of Hope, South Dakota, for his father.

Following these events, 47 tracked down Lenny and his gang members. Once the rest of the Cougars had been dealt with, 47 kidnapped Lenny and forced him to dig a grave in the middle of a barren desert, whilst questioning him on the location of Victoria. Once Lenny tells 47 of Victoria's location, the player is given the choice of killing Lenny (either by shooting him, attacking him in close combat, or the explosives he hides behind) or letting him live at the mercy of vultures, presumably to die from dehydration. Either way, Lenny doesn't reappear in the game.

Lenny seen with Wade during the Rosewood Orphanage break in.

Lenny's Close up at the Rosewood Orphanage.

Lenny carves his name onto the bar at the Great Balls Of Fire bar.

Lenny, responding to Wade at The Great Balls of Fire, a bar on the outskirts of Hope.

Lenny accidentally shoots Sister Mary at the basement of the Rosewood Orphanage, while responding to Wade's mocking.

47 watching over Lenny digging a grave.

Lenny Digging a grave as per 47's punishment. 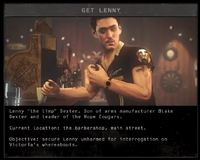 47 about to give Lenny a close shave.

Retrieved from "https://hitman.fandom.com/wiki/Lenny_Dexter?oldid=89071"
Community content is available under CC-BY-SA unless otherwise noted.