Malcolm Sturrock is the brother of Campbell Sturrock who emigrated from Scotland to Romania with his brother.

He emigrated from Scotland to Romania with his brother Campbell Sturrock.

Some time prior to the 47's contract Malcolm's brother Campbell kidnapped the daughter of a Romanian man and was prosecuted for the abduction. Even though the evidence against him had been overwhelming, his lawyer, with help of some bribes, got the case thrown out of court and set him free. At some point, Campbell turned the girl over to Malcolm.

Malcolm spent months brutally torturing the girl, at some point prior to her death removing both of her eyes and sawing off her arm. He killed her sometime before the BDSM party, and had her partially dismembered by the time 47 discovered her. During the party he spent all of his time on the second story of the slaughterhouse. He regularly made routes between the kill room where he would eerily dance in front of the girl's hanging corpse to Paul Anka's Put Your Head On My Shoulder and another room where he would chop up pigs. When 47 found The Girl, he informed Diana that he found her and that she had already been killed by Malcolm, then left with her severed arm for identification after he kills him.

Simply clad in a butcher's apron over his white shirt, briefs, socks, and rubber or plastic gloves. He is a bald, overweight white male, though not as obese as his brother. He is generally armed with a meat cleaver and (unless Campbell) can fight effectively with it.

Malcolm is a psychotic serial killer with a pseudo-romantic relationship with his victims based on his use of music and building a shrine to them. It is unknown how many other victims he has slain. When he talks it's almost impossible to interpret what he is saying. Some players claim to hear him utter the words Bloody Meat.

The presence of a wooden cross with handcuffs attached suggests that Sturrock tortures his victims before he kills them or this is where he restrains them while they are butchered. However, the latter is unlikely as The Girl's severed arm appears to have been cleanly removed by specialized machinery - such as that in the room that Sturrock visits to cut up pigs.

Most of his dialogue is quotes from Scottish poet Robert Burns. 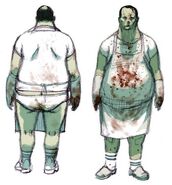 Retrieved from "https://hitman.fandom.com/wiki/Malcolm_Sturrock?oldid=81082"
Community content is available under CC-BY-SA unless otherwise noted.