watch 04:21
Wiki Targeted (Games)
Do you like this video?
Play Sound

Masahiro Hayamoto (早元 昌弘 Hayamoto Masahiro) was the head of a Yakuza clan of a crime syndicate known as Yamaguchi-Gumi.

His history prior to running the local chapter of the infamous crime syndicate, Yamaguchi-Gumi is unknown. Being the leader of said group, he primarily generates his income from pornography, smuggling of goods, narcotics (primarily amphetamines) and arms dealing which is his favourite source of income.

Around the 1960's, his only son, Masahiro Hayamoto Jr. was born. To ensure his safety from assassination attempts, including one in 1988, where he was shot in the neck by a member of a rival yakuza clan, he inhabits a six-story Katsuyama-jō castle which is guarded by highly-trained shinobi ninjas, snipers and the latest electronic security measures.

Given this penchant for weaponry, Hayamoto spends a lot of time with them, even acquiring a missile guidance system. This has infuriated the Agency's client, who wants Hayamoto eliminated and the guidance system recovered.

For this to happen, Agent 47 must first kill his son Masahiro Hayamoto Jr. at his remote private estate and implant a transmitter in his corpse. After Hayamoto's guards bring his son's remains to his home, 47 infiltrated the caste.

Master Martial Artist: Hayamoto have shown his skills with his Katana and been practicing it daily. Best assumed to be mastered his way of unarmed and armed combat.

Master Swordsman: His swordsmanship have been honed ever since he took up Kendo (Kenjustu).

Peak Agility: Like his Ninjas, he too shown his agility to pull his flashy sword techniques and movement. 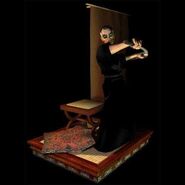 Haymoto as seen during the Shogun Showdown mission loading screen.
Add a photo to this gallery

Retrieved from "https://hitman.fandom.com/wiki/Masahiro_Hayamoto?oldid=98181"
Community content is available under CC-BY-SA unless otherwise noted.