"We did find some papers, later. Enough to prove that Doctor Ortmeier (sic) created Mister 47. No one else has successfully created a Class I human clone. Dr. Ortmeier literally wrote the book."
―Alexander Leland Cayne about Agent 47 and Ort-Meyer.

Scientist
Leader of the Five Fathers

Otto Wolfgang Ort-Meyer (also known as "Dr. Ort-Meyer" or "Professor Ort-Meyer", and occasionally spelled as Ortmeier) is one of Agent 47's five genetic fathers and was the one responsible for his creation. He is the main antagonist of Hitman: Codename 47, and was posthumously mentioned to be an operative of Providence.

Born in the early 1930s, Ort-Meyer was a prominent German scientist fascinated by theories about genetic manipulation. In the 1950s, he served in a unit of the French Foreign Legion in Vietnam. There he befriended with four future criminals: red dragon triad leader Lee Hong, drug lord Pablo Belisario Ochoa, international terrorist Frantz Fuchs and gun runner Arkadij "Boris" Jegorov.

Either during his time at the Foreign Legion or shortly after, Ort-Meyer began to question the soldier's competence and subordination and started to develop his ideas about genetic recombination and the use of human cloning to produce a perfected version of the human species, superior in strength and mind and unburdened by conscience. Ort-Meyer, determined to prove his abilities to the scientific world, brought up the topic of engineering the perfect soldier, but his radical theories were deemed insane by the scientific community.

After being discharged, he ran a mental institution in Satu Mare, Romania, which he used as a cover for his genetic experiments.His ultimate goal was to create an army of flawless and unquestioningly obedient soldiers.

The clones are also used to provide assassins for Providence who is also funding his clone project. Some time in the 1980s, both Subject 6 and 47 escape their prison to a nearby village. Their escape didn't work as Ort Meyer and the guards tracked them down easily and killed any witness. Despite their capture, both clones still harbors sentiment of freedom and revenge and planned their insurrection in the Institute. However, Ort-Meyer knew their plan and had his guards armed. 47 was recaptured and 6 escaped, with everybody thinking 6 has been killed. The Constant ordered a memory wipe of the clones to prevent another insurrection, Dr. Ort-Meyer used a chemical which wipes any emotional feelings to make the clones more obedient.

However, as time went by, 47 kills other clones (using 47's old pills) as they have no more assassinations to commit which shocked the doctor and infuriated the Constant who demand to hand over 47 to Providence. This angers Ort-Meyer as his project is handed over and his business deal with Providence is cut. Not only that, his old army friends are angry that they are not receiving any profit from the project and demand to handover 47. In order to maintain contact with Providence and get revenge against his former friends, he decide to release 47 in the wild and order hits on his friends while promising Providence a superior clone assassins for them.

"Wake up! Wake up, my friend! It's the dawn of a new day, and you have things to do! I will guide and teach you, and you will learn by doing."
―Dr. Ort-Meyer

In the mission Training, appearing only by voice, he guides the player through the basement levels of his insane asylum to acquire weapons and teaches him how to use them correctly in the field. He continues to help Agent 47, until Agent 47 finally escapes and leaves the asylum. Throughout the game, it is gradually revealed that Ort-Meyer was in a group at some point that planned the cloning of Agent 47 by taking genetic samples of all the members of the group. The five fathers know each other from serving in French Foreign Legion when they were young. At the end of Codename 47, the International Contract Agency finds out that all the hits are requested from the same exact person, Ort-Meyer. With all his friends dead, he requested his final contract to ICA, who accepted it because of his authority even though it violates their rule to never start a war. 47 is sent by the agency and finds his target, Dr. Kovacs. Unbeknownst to 47, this mission was a setup, orchestrated by Ort-Meyer.

47 recognizes Kovacs as the doctor had once given him a forced injection. Kovacs explains that Ort-Meyer was in charge of the cloning experiments. Ort-Meyer, the client behind all of 47's hits, had meanwhile called in the Romanian special operations to deal with 47. However, according to Hitman 2: Silent Assassin, 47 managed to kill Kovacs and then fight off the Romanian SWAT members and orderlies. After helping Agent Smith from his drugging, Smith shows 47 the location of Ort-Meyer's secret lab.

When Ort-Meyer notices 47 in his secret lab, he explains to 47 that he is his creator. He unleashes a set of loyal clones to deal with 47. Unexpectedly, 47 kills all the clones, due to the clones' lack of experience, gets past the code recognizer, and into his lab, where Ort-Meyer believes he is the sole remaining clone model that killed 47. When 47 fires a bullet into Dr. Ort-Meyer, his final words are "I did not even recognize my own son." As Ort-Meyer realizes that 47 was his ultimate creation and there was no need for a clone model, Agent 47 finishes him by snapping his neck.

"47.. I should have known.. I didn't even recognize my own son.. You broke my heart my son.."
―Dr. Ort-Meyer's final words, moments before Agent 47 snaps his neck

Ort-Meyer appears briefly in the Asylum Aftermath mission, which takes place immediately after the end of Hitman: Codename 47. In the opening cutscene of Asylum Aftermath, 47 shoots Ort-Meyer, and while he is bleeding out and uttering his final words he snaps his neck.

In order to escape the asylum, which is being raided by the SWAT team, Agent 47 has to acquire Ort-Meyer's car keys, which can be found on his body, at the office where Dr. Kovacs was, and on the SWAT patrolling around the vehicle, which hints that Ort-Meyer must have made spare keys for him to use in case his were stolen. The car is a black sedan, and resembles a 1987-97 Peugeot 405.

In this game, Ort-Meyer is misspelled Orthmeyer, though, when the player enters Lee Hong's office in The Wang Fou Incident, the key-card on Hong's desk is named "Orthmeyer's Keycard."

During the opening cinematic to the mission The Murder of Crows, there is a scene where Agent 47 can be seen snapping Ort-Meyer's neck. In the subtitles of the cut sequences between Rick Henderson and Alexander Leland Cayne, Ort-Meyer is misspelled Ortmeier.

Though Ort-Meyer doesn't appear in Hitman: Absolution, he is mentioned in Dr. Warren Ashford's video log when he remarks that the work done with Victoria, who is later revealed to have been genetically engineered, is on par with that of Ort-Meyer, suggesting that he has some underground notoriety.

He was indirectly mentioned by Diana Burnwood while conversing with Arthur Edwards in the cutscence "Partners, Then?".

Ort-Meyer is mentioned by Diana Burnwood in the "Long Shot" cutscene. "-Ort-Meyer was Providence." He is also mentioned in passing by Janus in the mission Another Life if 47 poses as his nurse, with Janus first musing that he once knew a doctor who would have found the "refined mix of cultures" in 47's appearance quite interesting. He goes on to describe Ort-Meyer himself as a "madman" and his super soldier project both "idiotic" and a "waste of resources". This is corroborated by Arthur Edwards in The Ark Society if Agent 47 confronts him directly, where he mentions that Janus found Ort-Meyer's cloning project to be both distasteful and inefficient.

An easter egg and secret ending occurs if the player does not chose to sedate Edwards, and counts to 47, the player will get an option to sedate himself. Doing so will knock 47 unconscious. When he regains consciousness, he finds himself in a padded cell with The Constant mimicking Ort-Meyer's introduction speech at the start of Hitman: Codename 47. This ending is a shoutout to the first Hitman game from 2000.

"Wake up. Wake up, my friend. It's the dawn of a new day and you have things to do."
―Arthur "The Constant" Edwards

Despite his death at the hands of his own subject, his legacy of 47 remains as he is proven over time to be the best assassin in the world. Because of 47's background as a clone, this led to many people like Alexander Cayne and Benjamin Travis attempting to replicate the cloning process to create the perfect clone weapon (Mark Parchezzi and Victoria). However, they were killed and the projects were disbanded.

Ort-Meyer's project soon haunts 47 as Sergei, brother of Arkadij (one of the Five Fathers), finds him and forces him out of retirement. Another part of 47's past with this project came to haunt him when the Shadow Cilent started hunting down Providence assets. It is later revealed that the Shadow Cilent is 47's clone brother and Providence have been using clones as hitmen since before 47's escape from the asylum. This led to 47 joining Lucas Grey to destroy Providence as revenge for been used as tools.

Ort-Meyer allowing 47 to be released into the wild had several large consequences, including the planned deaths of his French Foreign Legion comrades, the death of himself, the later destruction of Providence and cementing 47 as the worlds greatest assassin.

The notes of Dr. Ort-Meyer while Agent 47 was growing up and receiving his training to become an assassin.

"You are an excellent pupil — it's a pleasure to see you at work. At this speed you will soon have perfected your skills. I'm in awe of your efforts and results."
―Ort-Meyer complimenting Agent 47 in the Asylum

"You broke my heart, my son. What good is a bulletproof vest, when death strikes from within?"
―Ort-Meyer's monologue, right before he dies. 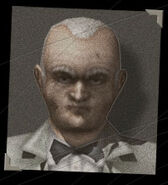 Ort-Meyer as seen in his file photo.

Ort-Meyer after being shot by Agent 47.

"You have proved, to be my favorite son. I'm so proud of you!"

Ort-Meyer's body and the blood Hitman Insignia in Hitman: Contracts.