watch 02:45
Wiki Targeted (Games)
Do you like this video?
Play Sound

Rick Henderson is the reporter that interviews Alexander Leland Cayne about the White House Attack.

Little is known about Henderson's early life apart from the fact that he is considered to be a very prominent journalist. He covers stories for the newspaper First Edition.

Henderson comes to interview Cayne about the White House attack, but Cayne starts talking about Agent 47 and the contract killings he commits from "A Vintage Year" to "Amendment XXV". Henderson appears in most cut-scenes throughout the game, his questions to Cayne serving to elicit plot information and advancing the story. As Cayne's answers are sometimes incomplete or untrue, it is revealed to the player that Cayne has hidden motives. Initially, Henderson doesn't believe Cayne when he mentions Agent 47, believing the assassin to be merely an urban legend. But when he sees 47's body being readied for cremation, Rick is surprised.

47 later kills Rick alongside everyone else at the funeral in "Requiem" when the antidote kicks in. Although he will run away, Diana locked the gate to prevent anyone from escaping. 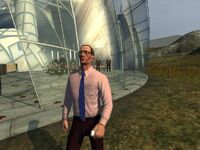 Rick walking away from 47's funeral
Add a photo to this gallery
Retrieved from "https://hitman.fandom.com/wiki/Rick_Henderson?oldid=95964"
Community content is available under CC-BY-SA unless otherwise noted.