Scissors are a melee weapon found in Hitman: Absolution, Hitman™, and HITMAN™ 2.

"A large pair of shears for cutting various materials."

There is a pair of Scissors in the basement's security room, which is the most south eastern room, lying on top of a desk along the eastern wall. On the ground level, you can find three scissors inside the dressing area, which is the large southern room, just south of the middle room where the catwalk is located. They are lying on top of the makeup tables throughout the middle of the room. There is also a pair of scissors located in the ground level's storage room just south of the two most north eastern bathrooms.

On level 2 there is a scissor inside the bedroom belonging to Sheikh Salman al-Ghazali's suite, which is the most north eastern room on the floor. It can be found lying behind the bed. On level 3 there is a scissor located inside the private bathroom belonging to Dalia Margolis's private office, which is the room just east of the room where the IAGO auction is being held on the west side of the floor. Another pair of scissors can also be found on the top floor's south western terrace, lying on a table in the corner, just outside the most south western office room. 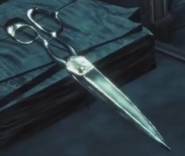 Agent 47 after stabbing a Sheriff in the neck.
Add a photo to this gallery
Retrieved from "https://hitman.fandom.com/wiki/Scissors?oldid=80317"
Community content is available under CC-BY-SA unless otherwise noted.