The Security Camera is a surveillance measure located in heavily guarded areas. They are based on CCTV (Closed-circuit Camera).

Security cameras only appear in a few missions in Hitman 2: Silent Assassin. They can only be disabled by either getting shot at or by shooting the camera control, the latter of which is an actual objective in the mission Basement Killing.

The camera can be found in multiple missions in-game, which are equipped with night-vision so staying in the dark is useless. However, there will almost always be a security station around the map with monitor machines in it. Stealing the video tape will disable all cameras in the level and remove "Caught on Camera" in mission debriefing.

Shooting the cameras can also disable them, however the cameras are mostly found in public places, it is not wise to pull your guns out while you are under cover. Also, if a guard is watching the monitor the camera transmits to, he will run to the camera to see what happened. The camera has a short scan range, keep a distance from it if you can.

They appear only visually in Hitman: Absolution, and do not play any gameplay role, apart from a cutscene in Blackwater Park.

They return and work largely the same as in Hitman: Blood Money, with minor changes. It's now possible to see the area they are watching via a hard-to-see green grid. There are multiple security stations on certain maps, with certain cameras providing feed to different stations. Instead of stealing a tape, 47 now needs to destroy the recordings, either by hacking/deleting them (silent, but suspicious) or by shooting them (noisy, depending on the gun used).

Originally, each set of cameras in Sapienza had their own recordings, but a patch changed it so that all cameras are deactivated regardless of which station was destroyed.

Professional difficulty reintroduced the mechanic of camera destruction triggering a security guard to investigate. In addition, suspicious actions or trespassing are sufficient for security to spot 47 through the camera system, and the number of guards for each recording location is increased.

Security cameras are absent in HITMANTM 2 on Casual difficulty.

A security camera as seen in Hitman: Blood Money's Flatline mission.
Add a photo to this gallery 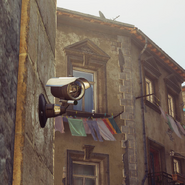 A security camera as seen in HITMAN™'s World of Tomorrow mission. 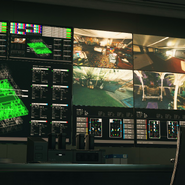 A camera recorder as seen in HITMAN™'s Club 27 mission.
Add a photo to this gallery

Retrieved from "https://hitman.fandom.com/wiki/Security_Camera?oldid=81424"
Community content is available under CC-BY-SA unless otherwise noted.