Shogun Showdown is the 10th mission of Hitman 2: Silent Assassin. It is the 4th and final part of the hit on Masahiro Hayamoto.

Agent 47 can breathe deep. The long, cold, snowy and perilous journey through the wild lands of central Japan is finally over. The only chore now is to make his way through the annals of Hayamoto's ancient yet deviously high-tech castle, recover the missile guidance system from his basement museum, eliminate the target and, most importantly, escape alive.

47 — Diana here! I see you managed to infiltrate the castle. Good work! This castle, Katsuyama-Jo, is the headquarters of Masahiro Hayamoto.

Your objective is to track down Hayamoto and eliminate him, as well as get away safely with the missile guidance system in his possession.

Although this squeaky old fortress may look obsolete, make no mistake — it's equipped with all the latest electronic security measures.

On top of that, the place is crawling with ordinary security guards at lower levels, and Hayamoto's own handpicked yoyimbos at the top.

Approach this assignment with the utmost caution, 47 — these people are ruthless, fanatical, and extremely clever. 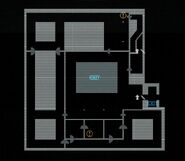 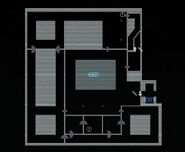 6th floor map
Add a photo to this gallery

Location of the objectives; depicted as image

Yoyimbo guard typing the code for the laser grid.

Hayamoto placing the missile guidance system in his museum.

Hayamoto's Helicopter, in which 47 escapes later

Laser Doors; one of the various security measures of Hayamoto's castle

External guards paying respects to a religious altar inside, next to the card.

Agent 47 screening a Yoyimbo on patrol.

Picking through the keyhole, 47 spots a patrolling guard and a sword-armed sentry.

Guards reacting to a downed Yoyimbo getting up.

The exhibit containing the missile guidance system is protected with lasers.

The exhibit also contains a katana and the .22 Suppressed.

Lei Ling recognizes Agent 47 and calls him by his former alias of Tobias Rieper.

Agent 47 chastises her for always falling for the bad boys.

The difference in height between 47 and Lei Ling.

Masahiro Hayamoto in his private chambers.

In a scripted event, three sword-weilding body guards will jump from the ceiling.

47 and Lei Ling as they start their escape.

The escape route from Hayamoto's window.

Suit only, crossbow in hand and with Lei Ling.

Even covered head-to-toe, Lei Ling will recognise and follow 47.

Escaping with Lei Ling by hijacking Hayamoto's helicopter.
Add a photo to this gallery

Retrieved from "https://hitman.fandom.com/wiki/Shogun_Showdown?oldid=85951"
Community content is available under CC-BY-SA unless otherwise noted.