Phoebe Dorin[1]
Sister Mary was one of the owners of the Rosewood Orphanage along with Father Peter Bennet and was the Head Nun of the orphanage.

Sister Mary's personality is noted for her silent and calm character. She has love for everybody as she is seen not accepting money from Agent 47 for taking care of Victoria.

Little is known about Sister Mary except that she is the head nun and one of the owners of the Rosewood Orphanage with Father Peter Bennet. She also takes in children for free as seen in a cut-scene where 47 tries giving Mary some money but she refuses it saying " We will take good care of her ".

Life as a Nun

Agent 47, after parting with Father Emilio Vittorio didn't give up his faith altogether. Therefore, he befriended Sister Mary. After 47 seemingly killed Diana Burnwood, he trusts the nuns for the protection of Victoria as the Agency was looking for her.

Blake Dexter, who was searching for Victoria, hires Edward Wade to kidnap Victoria, Wade arrives with Lenny Dexter. He shortly learns that 47 is in the orphanage. Therefore, he changed his plans and raided the orphanage. He found out Sister Mary in the basement as 47 had told them.

Later once 47 restores power to the elevator, Lenny is later seen arguing with Wade in the basement about also wanting to be in-charge, which Wade laughs at. Lenny attempts to prove that he is serious by aiming his pistol at Sister Mary, who is in tears and praying fervently at this point, and telling her to shut up or he'll shoot her. Wade then makes more back-handed praise at Lenny, which infuriates him. This causes Lenny to accidentally discharge his weapon at Sister Mary, killing her.

Lenny appears to have genuinely regretted in accidentally killing Sister Mary. His passive dialogue in later levels shows his guilt.

Lenny accidentally shoots Sister Mary at the basement of the Rosewood Orphanage, while responding to Wade's mocking. 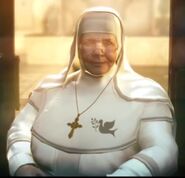