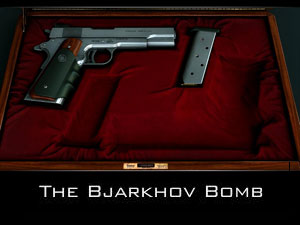 The level starts in a plane. Stepping out into plain sight in the suit will instantly blow 47's cover. One way to get a disguise is to wait for a civilian to step into the plane and take a supply crate. As he is about to leave, sedate him, drag him inside and take his uniform. Of course, the sedation doesn't last forever, so the mission will have to be done quickly. Another way is to exit through the front of the plane and head towards the tower. Go through the door on the front and down the ladder inside into a tunnel. Behind the first door to the left is an office with a lone guard watching a screen. Sneak up behind him, sedate or fiber wire him (you can get away with killing one enemy and still get a Silent Assassin rating in Contracts) and take his uniform.

Fuchs spends all his time in the mess hall in the building with a kitchen in the upper-left area of the map. The Agency Contact, Yurishka, is the cook. He will give some information that can help in the mission. The only way to kill Fuchs discreetly is to take the laxative bottle in the kitchen, spike the soup on the stove when no-one's watching, then go into the bathroom and hide in the lower-left corner so you'll be hidden when the door is opened. After eating the spiked soup, Fuchs will enter the restroom to relieve himself. After he enters, close the door and kill him. If you don't manage to fiber wire him before he sits down, you can deal a quick headshot with the Silverballer. Afterwards, take his uniform. It will be useful when killing Bjarkhov.

While Fuchs' clothes will give 47 access almost everywhere, he can still be recognized by guards, so keep a safe distance. After stepping out of the restroom, 47 will be escorted by a guard to a rail through a tunnel to the boat and submarine. Bjarkhov is on the upper floor of the ship. The entrance is guarded by two sentries. You can't enter Bjarkhov's office with guns, so dump any you might have if you haven't done so already. Take the second door on the right and go up the stairs. Exit and step onto a walkway. Go past the two guards and take the first door on the right. Go inside the office and be greeted by Bjarkhov. Afterwards he will go and get drinks. Wait for him to turn around and then fiber wire him.

Arguably, the easiest part is to destroy Bjarkhov's bomb production capabilities, which are housed in the submarine next to the ship. There are three weak points on the outside hull that are to be blown up in order to sink the submarine. There are two ways to obtain the explosives. One is to go behind the first door on the right past the ship's entrance. There are three guards in the room, but if you're disguised you can slip past them as long as you don't stick around long enough for them to become suspicious. The room behind the door behind them is a storage room filled with guns and, most importantly, three remote controlled bombs and a detonator. The other way to get the bombs is to go to the warehouse in the upper-left side of the map, take the hazmat suit from one of the stalls and enter the submarine. To the right is a fairly secluded area where three bombs and a detonator can be found. Take the explosives, go past the submarine entrance and down the ladder onto the thick ice. Place the bombs on the weak points indicated by the action menu (they will also appear as POIs if you spoke to Yurishka earlier, but can be activated regardless) and go up the ladder again. Go to a safe distance and detonate the bombs, sinking the submarine. Finish the level by returning to the airplane.

This is another walkthrough which will allow the player to knock out all three mission objectives at once. First get a disguise--it is recommended you use the second tactic by exiting the front of the plane, making your way to the control tower, going down the ladder, going into the first room on the left, choking the soldier, and taking his uniform. Return to the surface to meet with your contact in the Mess Hall. Don't bother with Fuchs. Just head into the tunnel and cross it on foot. Once you get to the other side, make your way to the warehouse in the upper-left side of the map, take the hazmat suit from the stall to the immediate right by the entrance, and then go to the submarine. Get the explosives, go past the sub entrance, and down the ladder onto the ice. Place the bombs in the locations indicated on the map--beware the military officer that goes by the ladder doesn't catch you at all. Once the bombs are planted, go up the ladder again and run to a safe distance. Return to the Warehouse, but don't go inside. Go to the right-side of the Warehouse where the large crate is and stand where you can see the sub. Eventually Fuchs and Bjarkhov will arrive at the submarine in a jeep. Wait until both targets walk a good distance down the dock (Saving is recommended). Now duck behind the large crate so nobody can see you, take out the detonator, and set off the explosives. This will destroy the sub and take out both targets at the same time as well as several guards without hurting your rating. Change back into your soldier outfit in the warehouse and then make your way back to the airplane to complete the mission.

Note: On occasion, one target may actually survive the explosion and simply be wounded. If that happens, you will have to walk back to the dock until you find your wounded target, make sure no one is watching, and finish him off with single shot to the head with your silenced Silverballer. Then return to the warehouse to change back into the soldier uniform and make your way back to the plane.

Retrieved from "https://hitman.fandom.com/wiki/The_Bjarkhov_Bomb/Walkthrough?oldid=45850"
Community content is available under CC-BY-SA unless otherwise noted.