Now that Lee Hong and the Red Dragon Triad has lost most of their nobility and protection, Agent 47 is now able to get to Lee Hong. Hong stay's held up in his mansion in the back behind the fish restaurant, along with his beefy and tough companion, Tzun.

Even though the Red Dragons are weakened, they are still a force to be reckoned with, still fielding a small army. The player must find their way to Lee Hong and successfully assassinate him, along with obtaining his jade figurine.

Our customer wants Lee Hong dead, and the Jade Figure that empowers him.

This figure is very valuable, both in terms of money and symbolism. Locate this artifact and bring it to the clerk in the Herbal Shop inside the restaurant. He will know what to do with it.

Intelligence has informed that one agent is missing during the undercover work at Lee Hong's restaurant. His last report described a vast tunnel complex beneath the restaurant. We believe that he is being held hostage somewhere down there. We have transferred all info to your map.

Lee Hong runs a brothel on the second floor. It has been marked on your map. Lee Hong's appetite for women may be one of his weak spots.

When the triad have been alarmed they will seal off the whole area. Use Lee Hong's speed boat to get into clear waters where a pickup has been arranged for you.

The restaurant has female guards. 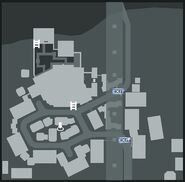 Outside
Español Русский
Community content is available under CC-BY-SA unless otherwise noted.
Advertisement