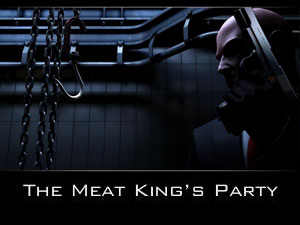 This walkthrough will bring you Silent Assassin rating on any difficulty.

Take the clothes from the unconscious butcher in front of you. Exit the truck and close the truck doors behind you by pressing a red shining button the side of the truck; if you don't, the butcher will inevitably wake up and run inside, blowing your cover. Drop any firearms you are carrying. You will have a meat hook, which you can keep (but will not need, plenty more weapons are available). Go around the building and you will see main doors where you will see two guards and some guests getting in party. Approach a guard and wait for him to frisk you ("feel your flesh"). Enter the double doors and you have gained access inside the slaughterhouse.

You will see another set of double doors in front of you. Go through them and go up the stairs in front of you. Go to your left and go through a few sets of doors. Wait outside the last room, watching through a keyhole until you see a deranged man with a cleaver pass you from right to left. This is Malcolm Sturrock, who is not a target. When he is gone, go into the room and turn right. You will enter a room containing the dismembered corpse of the client's daughter: you are too late. After a cutscene you should pick up her severed arm, as proof of death.

Killing Malcolm is NOT recommended, though it is possible to do so and still get a Silent Assassin rating. So, if your sense of justice demands it, wait at the keyhole for Malcolm to pass from left to right. Then, follow Malcolm into the room with the girl and either strangle him or kill him with your meat hook. There is no need to hide his body.

Puscus is Sturrock's lawyer. He can be recognized by his black suit and red devil-like mask. He spends his time going between a restroom and the opium dens, where an opium waiter (dressed in red) serves him and other guests opium pipes. An opium waiter disguise can be found in the locker room. The best tactic is to dress in the disguise, then hide in the shower and wait for the real waiter and a stripper to enter. Leave them, going out the back of the room, them take an alternative path back to the party. Pick up an opium pipe from the bar and enter the small room with Puscus. Put the pipe down, let Puscus smoke it and pass out, then kill him with a close-in weapon (there are plenty of knives and cleavers in the kitchen, or your trusty meat hook will work). Return quickly to the locker room the way you left, wait for the real waiter to disappear, then reclaim your butcher outfit.

Killing Puscus in the restroom may also be doable (and won't require a disguise change), but is far trickier. If you do so, hide in the corner to the left of the door, enter stealth mode and wait for Puscus and his body guard to enter. Puscus will go to sink and look at the wall. Sneak past him and sedate the guard, then sneak up to Puscus and kill him as well. You may have to kill the guard as well, so if you've killed Malcolm, you may want to consider the first method. Either way, Puscus is carrying a silenced pistol, but you can leave it behind; you won't need it.

Sturrock spends all his time in a bedroom on the upper floor (not that he can move anywhere else) alternating between being served whole fried chickens by butchers and being entertained by two prostitutes. Enter the kitchen dressed like a butcher. At one point, you will be instructed to take a chicken (which is marked on the map with a moving POI) to him. 47 will be frisked by a guard when trying to enter, and a meat hook will not be allowed this time around. Also, you can't use your fiber wire to strangle Sturrock where he is lying. However, you can hide a weapon inside the chicken while still downstairs; you can use Puscus's Silverballer (there's ammo in the bathroom), but a melee weapon like a meat hook or cleaver will work fine. After being frisked, go through the double door to the balcony and retrieve the weapon. If you do not take any weapons along, don't worry: there is a kitchen knife in a sofa in the room next to Sturrock's. If you holster it immediately after picking it up, the guard there won't do a thing. When you then go inside Sturrock's bedroom, the prostitutes will leave. Press a button on the wall to lower the curtains so no one can see through. Hand Sturrock the chicken and kill him while he scarfs it down. One hit from a knife/cleaver/hook is usually enough to kill him (whereas the lawyer sometimes takes 2-3 hits to die).

When Sturrock is dead, you may drop the weapon and retrieve the plate (though neither is necessary). Go downstairs, head through the kitchen, proceed outside, and go to one of the trucks that are marked as exit points. You will get Silent Assassin and Micro Uzi Dual.

Retrieved from "https://hitman.fandom.com/wiki/The_Meat_King%27s_Party/Walkthrough?oldid=55834"
Community content is available under CC-BY-SA unless otherwise noted.