"Hello, 47 Diana From The Agency here. We been contacted by a Romanian client. Given the complicated nature of his request, we recommended you for the job. The client wants this taken care of quickly and has agreed to your standard fee. So, here we go...The client believes his daughter is kidnapped and possibly killed by the Romanian "Meat King". A Scotsman named "Campbell Sturrock", the Romanian courts disagreed. Sturrock's Romanian lawyer, "Andrei Puschus" got the case thrown out. Our client wants this settled out of court. Crash their party and take them both out. We sent some details for you to read. If you accept this mission your fee will be transferred to your account. Take care 47, it's a pleasure to be working with you again."
―Mission briefing[src]

The Meat King's Party is the 2nd mission in Hitman: Contracts.

INFO: The Scotsman Sturrock and his brother Malcolm run Romania's largest meat packing plant. They're having a party on the premises tonight.

DETAILS: Our client believes his daughter was kidnapped and possibly killed by self - proclaimed "Meat King" Campbell Sturrock. Assassinate him and his lawyer, Andrei Puschus and get " The Girl".

Sturrock was prosecuted for the kidnapping but despite the overwhelming evidence against him his lawyer got him off through a technicality of Romanian law and some well-placed bribes. They're having a party to celebrate their courtroom victory tonight, so the security is going to be tight at the plant. Even so, it's an ideal opportunity to assassinate the targets. The large number of guests and staff at tonight's party should give you plenty of opportunities to get close to both men.

INFO: Puscus got Sturrock's prosecution thrown out through bribes and technicalities. He'll be the guest of honor at the celebration.

Agent 47 has been sent to a fetish party at Romania's biggest meat factory by the father of a missing girl. His mission is to kill Campbell "The Meat King" Sturrock and his lawyer, a VIP guest at the party. The party is being hosted to celebrate the collapse of a kidnapping case against Sturrock thanks to a technicality exposed by the lawyer (not to mention heavy use of bribery). In addition to killing the two men, 47 was contracted to find the girl and rescue her if she was still alive.

2nd Floor
Add a photo to this gallery 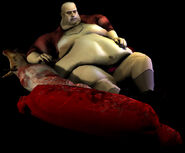 Campbell Sturrock AKA the "Meat King".

Retrieved from "https://hitman.fandom.com/wiki/The_Meat_King%27s_Party?oldid=81487"
Community content is available under CC-BY-SA unless otherwise noted.