The Wang Fou Incident is the 9th mission in Hitman: Contracts. It is a remake of the mission Ambush at the Wang Fou Restaurant from the first game, Hitman: Codename 47.

Diana here, 47. Things are moving in the right direction, but the triads are desperate to avoid an all out war. They're holding a summit on the Red Dragon turf to negotiate a truce, before things get out of hand. The meeting's at the "Wang Fou Restaurant", a heavily guarded Red Dragon property. The Blue Lotus negotiator is an older male, who will be arriving by limo. Take him out to prevent the truce from going through. We want the Red Dragons to take the blame, so we can't have any Blue Lotus members around as witnesses. Get rid of them all, 47. This one doesn't have to be pretty.

INFO: The Blue Lotus triad are sending a negotiator to meet with a Red Dragon representative on Red Dragon turf, in the hopes of averting a Triad war after the Chiu Dai park hit. Take him out.

DETAILS: The Triads are making one last effort to avoid open war. The Blue Lotus Triad is sending a negotiator to the "Wang Fou" restaurant to negotiate a truce with the Red Dragons. You'll need to take him out to prevent this truce from going through. The Wang Fou is Red Dragon turf, so it's heavily guarded at all times. We don't have positive ID on the target, but we do know he's an older male and he'll be arriving in a limo. He'll have the usual Blue Lotus security detachment. Take them all out. 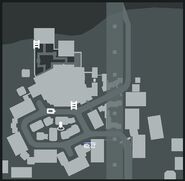 Outside
Add a photo to this gallery

Retrieved from "https://hitman.fandom.com/wiki/The_Wang_Fou_Incident?oldid=59571"
Community content is available under CC-BY-SA unless otherwise noted.