Tyler Colvin is the second-in command of the Hope Cougars.

Currently, little is known about Tyler apart from his affiliation with the Hope Cougars and Lenny Dexter. He is the mastermind of the plan to grab Victoria from Blake Dexter during the Shaving Lenny mission. He also owns the Green Mountain convenience store, at which his girlfriend works as a clerk. The top floor apparently also houses Colvin's office. Dialogue in the mission reveals that he plans to flee to California after finishing the deal and that he offers his girlfriend to come with him.

He is known to be an alpha male, intelligent and charismatic. He has a sensitive nature but is driven by ambition and cynicism. He is ruthless in achieving his goals.[2] 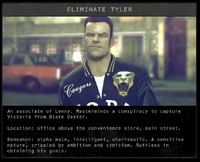 Tyler first seen during the Streets of Hope developer playthrough.