Isotope (Activates her special abilities and keeps her from getting weak)

Isabelle Fuhrman[1]
Victoria is a genetically enhanced teenage girl who has similar origins to that of Agent 47. She was first shown in the trailer: A Personal Contract. she is the deuteragonist in Hitman: Absolution.

Victoria is a genetically enhanced girl and has similar origins to that of Agent 47. She possesses strength and speed far beyond the human norm, at the major drawback of a constant need for exposure to the unknown isotope held within in her necklace pendant. Though not fully trained as an assassin, she had some knowledge of martial arts and knew how to handle knives and guns as well. Her creation was funded by Benjamin Travis without the knowledge and approval of the Agency. This caught the attention of Diana Burnwood. Knowing that Victoria was destined to live a life similar to 47's, she slipped the girl away from the Agency. To cover her departure, she cancelled all of the operatives' accounts and exposed the Agency to the public, thus leading to its near-destruction. Diana and Victoria hid for many months in a mansion in Chicago, until the Agency was able to reform itself and locate them. Agent 47 was sent in to kill the former and retrieve the latter.

47, under the orders of Benjamin Travis, infiltrated the mansion and shot Diana, apparently mortally wounding her. She asked 47 to take Victoria with him and never to give her to the Agency. Agreeing, 47 picked Victoria up at her room and took Diana's car to escape the mansion.

47 abandoned and burned the car somewhere later and walked away. After Victoria kept asking where he was going, 47 threatened her and asked why Diana broke her out of the Agency. She explained that Diana broke her out to save her from the 'Doctors' to 47. After that, 47 drops her at the Rosewood Orphanage, the safest place he knows.

Unfortunately, 47's informant Birdie is captured by Edward Wade, Blake Dexter, psyhopathic hired gun. Birdie betrayes 47 and tells Wade where Victoria is in exchange for his life. Edward Wade and his henchmen follow 47 to Rosewood. They raid the place, killing a number of staff and find Victoria in the basement. 47 kills Wade but Lenny kidnaps her and takes her to Hope, South Dakota. In Hope, the Hope Cougars are planning to kidnap her from Dexter Industries as part of a plan dubbed "Operation Mountain Lion" and sell her to a competing arms manufacturer Stallion Armaments which is offering them 'six figures'. The plan fails as 47 kills the entire gang, while 47 interrogate Lenny, he reveals that Victoria is kept by Sanchez. After 47 infiltrates the Dexter Industries, he found Dr. Ashford's research on Victoria, he destroyed the data and reached Sanchez. Victoria, meanwhile, has been placed temporarily in the care of Clive Skurky, sheriff of Hope County. She is subsequently picked up by Dexter, who transports her to his penthouse in Blackwater Park. 47 infiltrates Blackwater, killing Dexter's assistant Layla Stockton in the process and goes to the rooftop where Dexter is holding her hostage.

Dexter orders his scientist and guards to sedate Victoria, but she fights back, killing close to a dozen of Dexter's men in the process. Unlike 47, she is not without emotion and is visibly disturbed by her skills. She is ultimately sedated, but 47 reaches Dexter and kills him before he can escape. As he lies dying, Victoria empties the suitcase containing the ransom he collected from the Agency over him. Presumably, 47 takes her back to Diana's mansion, where Diana (who faked her death) is recovering from her wound.

Six months later, Victoria is seen at Diana's mansion, considering throwing her necklace containing the isotope into the ocean to ensure that she will not be able to kill anybody again. Diana tells her to 'do what you have to do'. Victoria's final decision is left ambiguous. During that scene, 47 watches from afar using a sniper rifle like a binocle. 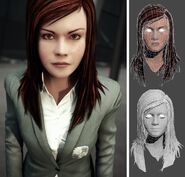 Victoria's image made by Tom Isaken, the character lead of Hitman: Absolution.

Victoria awoke at Diana's mansion listening to Diana about 47.

47 arrives with Victoria in a taxicab at Rosewood Orphanage.

47, Victoria, and Sister Mary near the Rosewood Orphanage

Victoria lying weak at the Rosewood Orphanage because she isn't wearing her necklace.

Victoria is revived by 47 by putting her necklace on

47 carries Victoria as she becomes weak

47 watches as Mrs. Cooper interrogates Victoria in the basement of the Hope Sheriff's Department.

Victoria sitting weak in the basement of the Hope Sheriff's Department.

Retrieved from "https://hitman.fandom.com/wiki/Victoria?oldid=91276"
Community content is available under CC-BY-SA unless otherwise noted.