The WWI Pistol is a Mauser C96 that was commonly used in World War I. A replica which fired harmless blank shots, was given to the actor who portrayed the Executioner in the Opera that took place in the Opera House.

This pistol of the World War I era can only be found in Hitman: Blood Money, and exclusive to the Curtains Down mission, in which no ammunition can be found for both guns. They are not collectible as well.

Despite its rather weak power, there are two rather important uses for the weapon:

The Real WWI pistol being retrieved by Agent 47.

The pistol in inventory view. 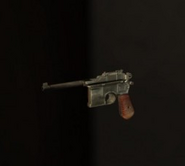 WWI Pistol
Add a photo to this gallery

Retrieved from "https://hitman.fandom.com/wiki/WWI_Pistol?oldid=84974"
Community content is available under CC-BY-SA unless otherwise noted.